The Russian Olympic Committee approved the final line-up for the Games in Beijing.

The Russian Olympic Committee (ROC) approved the roster for the Games in Beijing, which included 212 athletes. This was reported by the press service of the ROC.

The Olympic delegation consists of 461 representatives. In addition to athletes, it includes coaches, staff, managers and employees of the Federal Medical and Biological Agency (FMBA).

The athletes included 103 women and 109 men. The issue of providing two additional quotas in men's freestyle in mogul discipline is currently being resolved.

The Olympic Games in Beijing will be held from 4 to 20 February. Russia will be represented in all sports. Athletes will compete for 109 sets of medals. 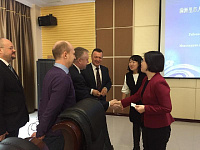 A Russian-Chinese hospital may appear in the Trans-Baikal Territory

"Children of Asia" go to Sakhalin

The route of the upcoming Silk Way Rally became known