The Organizing Committee of the Tokyo Games may set up a Communicable Combat Center.

The Organizing Committee of the Olympic Games in Tokyo is considering the possibility of creating a collegial body under the working name "Center for the fight against infectious diseases" to coordinate actions related to countering the coronavirus infection during the competition. Ambassador of Japan to Russia Toyohisa Kozuki spoke about this in an interview with TASS.

“Coordinating Council for combating novel coronavirus infection, consisting of representatives of Japan, the Tokyo administration, the organizing committee of the Games, the Olympic and Paralympic committees  Japan, infectious disease specialists, is now comprehensively reviewing and coordinating measures, including border control, as well as testing and medical care systems," Kozuki said. — A course was announced to consider the creation of Center for Combat Infectious Diseases under the Organizing Committee, the name is provisional.»

The center, according to Toyohisa Kozuki, will be designed to determine measures to counter the new coronavirus infection in various situations for three categories of people - athletes, other participants Games and spectators. It will make it possible to centrally take measures, including a rapid initial response to infection, including among athletes.

"The Government of Japan will continue to properly prepare working closely with the International Olympic Committee, the Organizing Committee of the Games, Tokyo and other concerned organizations so  athletes from all over the world were able to perform in the best conditions, and also so that the competitions were calm and safe, - said Kozuki.

The diplomat recalled that the Prime Minister of Japan Yoshihide Suga, in his New Year's address, expressed his intention to thoroughly prepare for the Olympic and Paralympic Games in Tokyo, which will become a symbol of the consolidation of the whole world.

The Olympic Flame arrived on a special flight to Japan

Drone Championship kicked off in Turkey 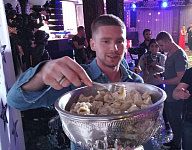 Dog sleds will pass through the streets of Omsk