Due to the COVID-19 pandemic, the tour site has been closed for nearly two years.

The first tourists in 2022 visited the Vostochny Cosmodrome, which is located in the Amur Region. Due to the pandemic, the facility for excursions was closed for almost two years, according to the website of the Center for the Operation of Ground-Based Space Infrastructure (TsENKI) on Monday.

with the spread of COVID-19. A group of Amur schoolchildren from the Romny District [Amur Region] came to the cosmodrome to see with their own eyes the place where launch vehicles are assembled and from where they launch into space, ”the message says.

It is noted that the visit was possible only if epidemiological requirements are met: there were up to 20 people in the group, wearing masks and the results of a negative PCR test.

Vostochny Cosmodrome is one of the most popular requests for visiting industrial facilities in the Amur Region. The only active civilian spaceport in Russia in pre-pandemic times received from 460 to 2 thousand tourists a year. Most tourists on Vostochny are schoolchildren and students, 20% of the total number are adults. Mostly residents of the Far Eastern Federal District come to the cosmodrome. As previously reported by TASS in Roskosmos, the enterprise is interested in conducting career guidance tours for students and young professionals in order to increase interest in working at Roskosmos enterprises, in particular at the Vostochny cosmodrome.

Vostochny is the first Russian civilian cosmodrome, it is located in the Amur region near the city of Tsiolkovsky (construction began in 2015 on the site of the former village of Uglegorsk). The decree on the creation of the cosmodrome was signed by the President of the Russian Federation in 2007. As part of the first stage of construction in 2012-2016, a universal launch complex for launch vehicles of the Soyuz-2 series was erected here. The second stage of the construction of the cosmodrome involves the construction of a launch pad for the Angara-A5 rockets and related infrastructure.
Russia Amur region Vostochny cosmodrome space excursions tourism TASS
|
Facebook
|
Twitter
|
VKontakte
|
Odnoklassniki 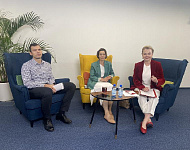 MEDSI doctors told whether it is worth getting vaccinated

In Dubai, for the first time in the world, a mosque will be built using a 3D printer

The most expensive perfume in the world presented in Dubai