According to the President, the region plays an important role in building up Russia's industrial potential.

Russian President Vladimir Putin congratulated the Irkutsk Region on the 85th anniversary of its formation, noting the region's contribution to building up Russia's industrial and scientific potential. The telegram with congratulations was published on Monday on the Kremlin's website.

"Your region plays an important role in the economic development of Russia, building up its industrial and scientific potential. You are rightfully proud of centuries-old cultural traditions, cherish the memory of the pioneers and researchers who did a lot for the development of Eastern Siberia, about outstanding countrymen who wrote bright pages in the chronicle of labor achievements and military glory of the Fatherland," the telegram says.

According to the head of state, today the region faces large-scale tasks related to the stable operation of energy, timber processing, mining complexes, attracting investments in mechanical engineering, transport infrastructure and agriculture, and the implementation of large high-tech projects. Vladimir Putin expressed confidence that achieving these goals will serve to improve the quality of people's lives, strengthen the social sphere, and create new jobs. In particular, the President noted the importance of the region's efforts to preserve the unique ecosystem of Lake Baikal.

"Once again, happy holidays. I wish you good health and the implementation of your plans for the benefit of the Irkutsk region and the whole of Russia," the President added
Russia Irkutsk region President Vladimir Putin congratulations TASS
|
Facebook
|
Twitter
|
VKontakte
|
Odnoklassniki

Solar energy came to the village of Markovo in Chukotka

Japanese students to be vaccinated against COVID-19 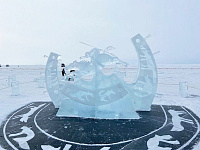 China will continue to study the nature of the coronavirus