Vladimir Putin: "Now the best qualities of each of you are needed and in demand"

Russian President Vladimir Putin urged the country's citizens to endure the self-isolation regime so that a turning point in the fight against coronavirus occurs.

He expressed confidence that Russia will definitely defeat this infection, as it has dealt with serious trials before.


"I would like to appeal to all citizens of Russia," the head of state said on Wednesday during a video conference with heads of regions - I understand that fatigue has already accumulated, a serious burden of financial, domestic, and other everyday problems, your usual rhythm of life has been disrupted. Putin noted that for most people it is "dreary and sickening" to constantly be within four walls, quoting the head of state TASS agency.
br> "But there is no choice now. The regime of self-isolation, its tests must be passed by all means. The turning point in the fight against infection, which we must achieve, depends on our discipline and responsibility," the president said.

He noted that "everything passes and this will pass". "Our country has gone through serious trials more than once: both the Pechenegs and the Polovtsians tormented it," Russia coped with everything, the head of state stressed. "We will defeat this coronavirus infection. Together we will overcome everything."

Putin called especially valuable is the fact that every day the strength and cohesion of Russian society is confirmed. In particular, he drew attention to doctors and nurses who act "selflessly, as a team." “Perhaps, in recent decades, for the first time, we have become so acutely aware of the importance and indispensability of their work,” the president said. He also mentioned volunteers, whose number is growing, as well as athletes, artists, journalists, who are also involved in the fight against infection. The President also noted that millions of citizens help their neighbors, take care of their parents and other family members, and "show high civic responsibility in this difficult time." "These are not simple, not empty pathos words, but our reality, when the best qualities of each of you are needed and in demand," the head of state emphasized.

According to him, Russia has the means to solve problems on any of the possible scenarios for the development of the situation with coronavirus, but it will not be possible to do without losses, although they can be minimized.

"We will work confidently and rhythmically, professionally. I emphasize that we have everything for this: a stable macroeconomic situation, minimum public debt, a solid "safety cushion" in the form of reserves accumulated over previous years, there are funds to solve problems in any of the possible scenarios. Finally, we have experience in overcoming the crises of past years," he said.
< br> "It is clear that certain losses cannot be avoided, but we are able to minimize these losses and create conditions for future development," the head of state added. According to him, support will be received "both by the sectors of the economy affected by the crisis, and the labor market," and the healthcare system. "We will do our best to help people who need such assistance today," Putin assured.

He stressed that "support measures in all these areas should be prepared in a timely manner, should be implemented taking into account the high dynamics situations." "It is impossible to put off such decisions, to delay them. I ask both the Russian government and the leaders of the regions of the Russian Federation to be guided by just such an initiative approach," Putin added.

The President noted that, based on the experience of countries facing the coronavirus infection, "the most difficult, the most difficult are the first four to five weeks from the beginning of the epidemic." "This means that the next two to three weeks will be decisive for the development of our situation. This is the period when we will need the utmost concentration of all resources, the most strict implementation of the recommendations of doctors, those preventive measures that are being introduced in every region today," he said. .

Putin added that today it is impossible to say with complete, "100%" certainty how the situation in the healthcare sector and the economy will develop both in Russia and in the world. "But we can predict with a high degree of probability, foresee possible scenarios for the development of the situation, which means that we can and must develop and have our own plan of action for each of these options, and then these actions will be timely and effective," the president stressed.

Friendship park of Kyrgyzstan and Azerbaijan to appear in Bishkek

Men's committee proposed to be created in Uzbekistan 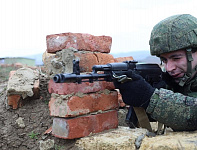 Divisions of the Caspian Flotilla conducted exercises in Dagestan

Japanese MPs to cut their salaries due to coronavirus

Russian ships made a business call to the Syrian port