The girl dreamed of going to the Mariinsky Theater for Swan Lake.

The President of RussiaVladimir Putingranted the wish of a schoolgirl from Stavropol, who dreamed of going to the Mariinsky Theater in St. Petersburg to see Swan Lake. This was reported to journalists on Tuesday at the Information Policy Department of the Government of the Stavropol Territory.

“Today, a schoolgirl from IzobilnyTatyana Trotsenko is going to the Mariinsky Theater in St. Petersburg to stage the ballet Swan Lake ". This dream of hers was fulfilled by the President of Russia Vladimir Putin. In early December, he removed the ball with the girl’s desire from the “Christmas Tree of Wishes,” the report says.

As the theater’s press service told TASS, Tanya was given a tour of the historical building of the Mariinsky Theater, where the performance is taking place today, and on the new building - Mariinsky-2. “The ballet “Swan Lake” itself is watched by a girl from the Special Box of the mezzanine. Today, Oksana Skorik (Odette-Odile) and Nikita Korneev (Prince Siegfried) are on stage in the main roles, and Gavriel Heine is at the conductor’s stand, ”said the representative of the theater.

It is noted that Tatyana is the eldest child in a large family. In January, she was diagnosed with a serious illness, she is undergoing treatment in St. Petersburg. The girl graduated from a choreographic school, entered a music school, and is fond of ballet.

“The All-Russian charity event “Christmas Tree of Wishes” is traditionally held on the eve of the New Year. During the four years of the campaign, more than 21,000 young residents of Russia received gifts. Following the example of the president, many caring citizens are engaged in the fulfillment of desires. Last year, Stavropol Governor Vladimir Vladimirov personally gave gifts to children who voiced their dreams at the regional Wish Tree, the message says.

According to the management, this In 2008, the region joined the action again, several Christmas trees decorated with cards with dreams will appear in the region at once.

Vladimir Putin On December 5, during the We Are Together award ceremony, he announced that in this will again participate in the Wishing Tree charity event. Live via video link, with the help of a young presenter Egor , the President removed from the Christmas tree installed on the stage in the Manege three postcards with wishes that he would have to fulfill. These are the desires of fourteen-year-oldMark Koblenevfrom the Moscow region, who dreams of a guitar, five-year-oldOsor Ayusheev from Buryatia (the boy dreams of being a fireman), and thirteen-year-old Tatiana Trotsenko< /b>From the Stavropol Territory. 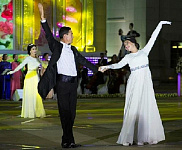 In the DPRK, for the fourth day in a row, not a single patient with fever was detected

An exhibition dedicated to D.Ye. Efimov opens at the Museum of the East