Vaccination passports of Mongolia, Thailand and Hungary recognized in Kazakhstan

Kazakhstan recognized vaccination passports of citizens of Hungary, Thailand and Mongolia as valid.

The authorities of Kazakhstan recognized the vaccination passports of citizens of Hungary, Thailand and Mongolia as valid, allowing residents of these countries to enter the republic if they have the relevant documents. This is stated in the decree of the Vice Minister of Health, Chief State Sanitary Doctor of Kazakhstan Yerlan Kiyasov, published on Saturday.

“To recognize passports, certificates, certificates of vaccination of Hungarian citizens, Thailand and Mongolia in accordance with the sample documents in accordance with the annex to this resolution, ”the document says. According to the resolution, the sanitary and epidemiological control authorities at the border checkpoints were instructed to allow citizens of the three indicated countries to enter the territory of Kazakhstan if they have vaccination documents.

The same resolution approved the methodological recommendations "Vaccination against coronavirus infection of the population in the Republic of Kazakhstan", as well as regulations for the storage and transportation of vaccines.

On February 1, Kazakhstan began to vaccinate the population against coronavirus with Sputnik V, produced in Russia. At the end of February, shipments to the regions of the country of the Russian vaccine, produced on the basis of the Karaganda pharmaceutical complex, began. On April 26, vaccination with a local drug against coronavirus QazVac began in the republic. At the end of April, the National Welfare Fund Samruk-Kazyna purchased 1 million doses of the Hayat-Vax vaccine from the Chinese company Sinopharm. In addition, in early June, the Republic received the first batch of CoronaVac vaccine produced by the Chinese company Sinovac Biotech in the amount of 500,000 doses.
Kazakhstan Mongolia Thailand Hungary passport vaccination coronavirus COVID-19 TASS
|
Facebook
|
Twitter
|
VKontakte
|
Odnoklassniki

An open-type sports complex will appear in Derbent 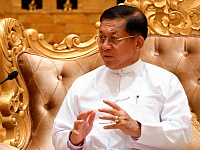 Monument to Marshal Zhukov opened in the center of Yekaterinburg

In Chechnya, May 4 was declared a day off in honor of the holiday of Eid al-Fitr