First of all, the drug will be received by doctors and workers in the tourism industry.

The use in Abkhazia of the Russian vaccine "Sputnik V", delivered on April 30 in the amount of 6.5 thousand doses as an aid to the republic, will begin after the May holidays. This was announced by the Minister of Health of Abkhazia Tamaz Tsakhnakia on the air of the Abkhaz state television on Wednesday.

“6.5 thousand doses of the vaccine are stored in a warehouse under special conditions according to the instructions. We have prepared regulatory documents that will regulate the start of the vaccination procedure - who is to be vaccinated and how it will be registered, on the basis of which institution - we will announce all this. We will dedicate this week to preparatory activities and after the holidays, next week, we will start a vaccination campaign,” Tamaz Tsakhnakia said.

According to the minister, vaccination will be voluntary and free of charge, in first of all, the drug will be received by doctors and workers in the tourism industry. Tamaz Tsakhnakia noted that 6.5 thousand doses is the first tranche, in total Abkhazia expects to receive 30 thousand doses of vaccine from the Russian Federation, "the timing of the second delivery depends on how the first one is worked out." “If we vaccinate at least 30,000 people, given that more than 14,000 people have already been ill, this will give good results to a certain extent in terms of reducing the incidence,” the head of the Ministry of Health said. He called on the population of Abkhazia to strictly follow all the recommendations of the sanitary services and the Ministry of Health before the vaccination campaign. “The numbers [in terms of incidence] are growing, the disease has become younger and accelerated, severe complications began to overtake patients already on the fourth or fifth day,” he warned.

Tamaz Tsakhnakia noted that the implementation 50 million rubles have been allocated in the budget of the republic for the target program to combat coronavirus infection, these funds will be used to purchase medicines, medical supplies, reagents for laboratories, including PCR diagnostics. “If a decision is made to purchase a vaccine, it [is provided for] in the section “drugs,” he said.

Speaking about cooperation with the Stavropol Anti-Plague Institute, with which the Ministry of Health of Abkhazia signed an action plan on April 30 in Sochi about the interaction, Tamaz Tsakhnakia said that it was about a joint study of the strains of the virus circulating in Abkhazia, as well as the study of the immune status of the population of Abkhazia. In addition, specialists for two new PCR laboratories in Ochamchire and Gagra will be trained on the basis of this institute. “Specialists of the Stavropol Anti-Plague Institute will be sent to Abkhazia on a rotational basis to train those laboratory assistants who will work in these laboratories,” addedTamaz Tsakhnakia.

Indonesia has organized a large-scale entertainment program for G20 leaders 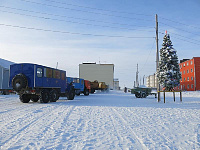 Batteries get warmer in Chukotka

Narendra Modi: "Yoga has become one of the most powerful unifying forces in the world"

The National Guard recalls the unprecedented feats of the NKVD servicemen

Russia supplies Sputnik-V to many countries