As the Russian Ambassador to Thailand Yevgeny Tomikhin noted, "strengthening the positions of compatriots abroad and further consolidation, providing support are among the priorities of the Russian leadership."

The 15th Regional Conference of Organizations of Russian Compatriots from Asian Countries opened on Saturday at the Amara Hotel in Bangkok. The two-day meeting is held in a hybrid format.

"We planned to hold this event back in 2021, but due to the coronavirus pandemic we had to postpone it twice," Russian Ambassador to Thailand Yevgeny Tomikhin said in his welcoming speech. - I consider today's long-awaited meeting all the more valuable, since for the first time in two and a half years, the heads of organizations of compatriots from Asia and the Pacific had the opportunity to meet face-to-face to exchange experiences and opinions, as well as to meet and maintain business ties."

According to him, during this period in some countries, the composition of organizations has undergone changes, in particular, new associations have emerged. "The current conference surpassed the previous one in terms of the number of participants, <...> in addition to representatives from China, India, Japan, South Korea, Mongolia, Singapore, Cambodia, Nepal, many of whom participated in a similar event in 2020 in New Delhi, compatriots representing Bangladesh joined them here for the first time in a new capacity and Malaysia," the diplomat added.

Evgeny Tomikhin stressed that "strengthening the positions of compatriots abroad and further consolidation, providing support are among the priorities of the Russian leadership." "Working with compatriots has acquired a new special significance in the light of the open and discriminatory pressure that has been exerted on our foreign communities throughout the world over the past months," he continued. "This is especially acute in Western countries, where the organizations of Russian compatriots are subjected to the greatest harassment and restrictions." At the same time, the Ambassador noted that "the situation in the Asian region and in Thailand in particular is characterized by a balanced and unbiased approach."

The diplomat recalled that this year Russia and Thailand celebrate the 125th anniversary of the establishment of diplomatic relations. "This event is important for us, despite covid or geopolitical difficulties. Nevertheless, we have already held many events on this occasion in both countries and others are still to come," he said.

It is expected that a resolution will be adopted at the end of the two-day conference.
Russia Thailand compatriots conference TASS
|
Facebook
|
Twitter
|
VKontakte
|
Odnoklassniki

Collection of five speeches by Putin published in Thai

India stands for strengthening ties with the SCO countries.

In the Omsk region, self-isolation of the elderly was canceled 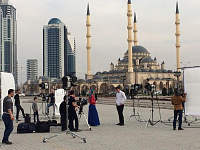 Xiaomi has assembled a technological Christmas tree from its smartphones