For special merits, the medal "For the Development of Siberia and the Far East" can also be awarded to foreign citizens.

Russian President Vladimir Putin has established a new state award in Russia — the medal "For the Development of Siberia and the Far East", as well as the jubilee medal "50 years of the Baikal-Amur Mainline". The relevant decrees of the head of state were published on Monday on the official portal of legal information.

According to the regulations on the medal "For the Development of Siberia and the Far East", it will be awarded to Russians for merits in the development of these regions, including "in the field of state construction, economy, industrial production, construction, transport, energy and information and telecommunications infrastructure, agriculture, science, culture, art, education, healthcare, environmental protection and other fields of activity". Foreign citizens can also be awarded with it for special merits.

By another decree Vladimir  Putin established the jubilee medal "50 years of the Baikal-Amur Mainline (BAM — approx. TASS)". The Government has been instructed to develop and approve the rules and procedure for awarding it, as well as to organize its presentation on behalf of the president.

The jubilee medal can be awarded to "active participants in the construction, reconstruction, development and maintenance of the Baikal-Amur Railway and its infrastructure facilities, including servicemen of the Armed Forces of the Russian Federation."

BAM is a railway in Eastern Siberia and the Far East, Russia's second (along with the Trans—Siberian Railway) main railway access to the Pacific Ocean. The total length of the road now is 4.3 thousand km. Description of medals

The jubilee medal "50 years of BAM" will be made of copper-nickel alloy, also in the form of a circle with a diameter of 32 mm. Its front side will depict a train moving along a semicircular viaduct (a bridge in an area with elevation differences) against the background of a stylized image of mountains and taiga. On the reverse side of the medal there are relief figures "1974-2024".
Russia President Vladimir Putin Far East Siberia BAM medal State award TASS
|
Facebook
|
Twitter
|
VKontakte
|
Odnoklassniki

A light metro will be built in Samarkand

Kyrgyzstan plans to buy drones from Russia and Turkey

Thailand is back under lockdown 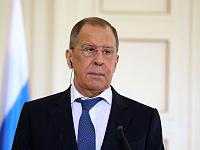 Turkey is waiting for the visit of the Russian Foreign Minister

In Khanty-Mansiysk, at the IT forum, it will be possible to complete a “bureaucratic” quest

Mass festivities were held across China on the Lantern Festival 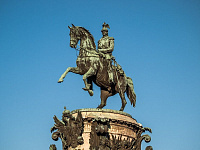 Monument to Nicholas I to appear in Armenia