A new Guinness Book record has been set in Kazakhstan

A Guinness world record was set in Kazakhstan as part of the Congress of religious Leaders.

The Guinness Book record in the nomination "The most multinational orchestra" was set in Kazakhstan on the eve of the Congress of Leaders of World and Traditional Religions. This was announced on Wednesday by the press service of the Senate (upper house) of the Parliament of the Republic.

"A new Guinness world record has been set in Kazakhstan. The project entitled "Music of the World" was held at the Palace of Peace and Harmony in the capital of Kazakhstan. The musical concert program The most nationalities in an orchestra is organized within the framework of the VII Congress of Leaders of World and Traditional Religions and is aimed at setting a Guinness World Record in the nomination "The most multinational Orchestra", the message reads. The concept of the event emphasizes the polyethnicity and tolerance of Kazakhstan, where representatives of more than 100 ethnic groups and 18 confessions live.

"Culture and art have a unifying force for people, regardless of their ethnicity, religion or social status. Today we are witnessing a historic event. It is symbolic that such a record was set on the eve of the VII Congress of Leaders of World and Traditional Religions," Senate Speaker Maulen Ashimbayev said.

According to him, the ideology of the concert fully corresponds to the idea of the congress — it is a dialogue, cooperation and joint solution of the most pressing issues of the modern world.

The composition of the "most multinational orchestra" included representatives of 75 different ethnic groups. "All these musicians are laureates of national and international competitions. On this day, musical compositions by Kazakhstani authors and world works performed by the national orchestra of the Republic of Kazakhstan, the chamber choir of the State Academic Philharmonic named after E. Rakhmadiev, dance groups and other artists were performed on the stage of the Palace of Peace and Accord," the press service of the Chamber said.

The VII Congress of Leaders of World and Traditional Religions will be held in Nur-Sultan on September 14-15. About 100 delegations from 50 countries are expected to participate in its work.
Kazakhstan congress religion record Guinness Book of Records TASS
|
Facebook
|
Twitter
|
VKontakte
|
Odnoklassniki

About 40 Syrians returned to their homes in a day 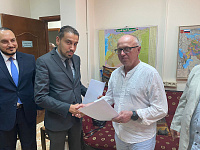 Reconstruction of the outskirts of Aleppo has begun

Armenia has a special attitude to the Victory Day

China will strengthen international contacts for the production of ecological cars.