The campaign will be launched in early 2023, writes the South China Morning Post.

The Hong Kong authorities intend to distribute 500 thousand air tickets for a total of 254 million US dollars for free to support tourism. As the South China Morning Post newspaper reported on Thursday, the action is planned for early next year, after all restrictions related to the coronavirus are finally lifted in the city.

"As soon as the government announces the abolition of all anti—visa restrictions for arriving travelers, we will launch an advertising campaign for free air tickets," the publication quotes the director of the Department of Tourism Affairs, Dan Cheng.

To this end, the administration of Hong Kong International Airport intends to actively work with local airlines. Free plane tickets are intended not only for arriving tourists — some of them will be given to departing travelers, and some will be distributed through travel agents.

Before the pandemic, Hong Kong was considered one of the most visited cities in the world, in 2019 it was visited by 56 million tourists. In the first eight months of this year, this figure was only 184 thousand.

On May 1 of this year, the authorities of this special administrative region of China allowed non-residents to enter the city for the first time since the beginning of the pandemic, provided they were vaccinated and quarantined for a week in specialized hotels. Previously, only local residents were allowed to enter, and the quarantine regime reached 21 days. On August 12, the quarantine period was reduced to three days.

Since September 26, Hong Kong has lifted a three-day quarantine for people arriving from abroad. The previous rule of "three plus four" — three days of mandatory quarantine and four days of self—isolation - was replaced by the formula "zero plus three". This means that during the first three days it is necessary to avoid crowded places, although the self-monitoring and testing regime is designed for a week. However, the innovation did not cause a massive surge in tourism and prompted mainly business travelers to come to the metropolis. In addition, many airlines, including Aeroflot, have not yet resumed direct flights to Hong Kong, which were interrupted due to the pandemic.
China Hong Kong tourism support flights promotion TASS
|
Facebook
|
Twitter
|
VKontakte
|
Odnoklassniki

Over the summer, the National Guard rescued 29 children in trouble

Sochi tourist train to resume flights to Gagra from April 30

A "Social navigator" appeared in YANAO

In Chelyabinsk, childbirth took place under the mantra

During the epidemic, Muslims are forced to celebrate Eid al-Adha at home 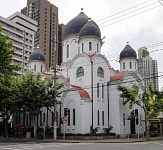