Uzbekistan Airways to fly to Tbilisi

The Ministry of Foreign Affairs of Uzbekistan announced the opening of a new direction of the air carrier.

“The parties noted with satisfaction that the national airline of Uzbekistan plans to open a flight on the Tashkent-Tbilisi-Tashkent route this year.” , – reported  on the official website of the Ministry of Foreign Affairs of Uzbekistan.

Direct flights between the countries ceased to be carried out in 1991, along with the demise of the USSR. Since then, flights have been carried out only through third countries and take at least 8 hours.

At the talks, the parties also discussed the prospects for bilateral relations in trade, economic, cultural, humanitarian, transport, communications, tourism and other areas.

In addition, the diplomats also touched upon the preparation of the upcoming ninth meeting of the intergovernmental commission on economic cooperation, which will be held in Tashkent. 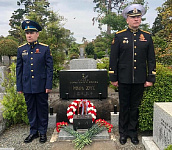 China celebrates Double Ninth, or Day of the Elderly

Iraq regains sovereignty over all provinces

A new car was attached to the mobile museum "Victory Train"