A training attack from the air, warm thanks, about the classics in a new way, Frisbee by the rules - see "Chinese Panorama"-274

The Air Force of the Chinese Army conducted exercises over the South China Sea
Early in the morning, bombers of the Chinese army took to the air. They were heading for the exercise area located in the South China Sea. On the spot, the pilots fired missiles at targets on the water. After completing the first round of strikes, the planes followed a different route to attack with laser-guided bombs. Then the fighters arrived in the designated area. They hit the targets with dozens of missiles and left the route, waiting for further instructions. At this time, after passing the inspection and refueling, the bombers again soared into the sky and began another attack. This was how high-intensity exercises were held to conduct an offensive operation of the Air Force of the Southern Zone of the PLA Combat Command.
Qi Li, pilot of the Air Force of the Southern Zone of the PLA Combat Command:
"Low sun, changeable weather and large waves in the morning make it difficult to detect sea targets and (further) use several types of weapons at once. Pilots need very good skills to destroy targets in such a difficult combat situation."
Yuan Fei, Brigade Commander of the Southern Zone of the PLA Combat Command:
"Recently, we have already conducted live firing exercises several times. These maneuvers allowed us to test not only the combat competence of our pilots and their ability to use new weapons, but also the characteristics of these weapons."
According to the military leaders, the seven-hour exercises were successful and laid a solid foundation for the troops to perform various complex tasks.
Residents of Chongqing thanked rescuers who fought forest fires
The streets of Chongqing are noisy: Thousands of local residents are escorting rescuers who fought forest fires, and are now returning home to Yunnan Province. Emotions are overwhelming: after all, thanks to joint efforts, we managed to cope with the fire. The heroes leave with goodies: residents pass bottles of water, boiled eggs and local delicacies.
"We came to thank the rescuers," says one of the residents of Chongqing Municipality. They came to help us put out the fire, and they worked very hard. We want to show our respect and see them off."
While the fight against the fire continued, the residents of the municipality brought cold drinking water and ice generators to the firefighters.
Bo Zhan, a firefighter from Yunnan Province: "During this mission, we gained a lot of experience: for the first time we climbed a mountain peak on motorcycles, for the first time we used ice to extinguish a fire.
The residents of Chongqing have provided us with significant logistical support."
Chongqing and neighboring Sichuan Province have been fighting forest fires since mid-August. Rescuers from Yunnan Province came to the rescue – more than 700 people were sent to extinguish the fire in Chongqing. Thanks to the joint efforts of emergency services and thousands of volunteers, it was possible to cope with raging forest fires. There are no casualties.  The Media Corporation of China has launched a new TV program "China in poetry and painting" In China, the premiere of a TV program about Chinese masterpieces of painting and poetry took place.

From the first issue, the audience learned about the history of creation, content, and cultural significance of five famous canvases. One of these is "Travelers among Mountains and Rivers" by Fan Kuan. It is called the best work of the Song Dynasty. The story of the works of art was supplemented with musical and dance episodes. And the pictures themselves on the screen seem to come to life: the program uses augmented reality technologies, computer graphics, 3D images and holograms.  The telecast was created jointly by the Media Corporation of China, the Ministry of Culture and Tourism of the People's Republic of China, the National Art Museum of China and other cultural institutions.

The First Beijing Open Ultimate Frisbee Championship has started in China
The First Beijing Open Ultimate Frisbee Championship is being held in the capital of China. This is a game in which teams of seven people score points by throwing a plastic disc into the opponent's zone. Previously, there were no referees in this sport: the participants adhered to the principles of fair play. The championship was the first official ultimate frisbee competition in China.
Kong Xiangfei, Director of the Beijing Social Sports Management Center:
"Beijing has taken the initiative to introduce official rules for ultimate frisbee matches – with the involvement of referees and the imposition of fines. We believe that the rules will help this sport become more official and professional."
The championship games will last until September 10. More than 2,000 residents of Beijing and neighboring provinces will take part in more than two hundred matches, competing in four categories: men, women, professionals and amateurs.
The flying plastic disk was named "frisbee" back in 1957, when Yale University students threw trays of Frisbee pie Company to each other. This game came to China in the late 1970s, and in recent years this sport has become really popular: the number of requests on the Internet about flying frisbee discs tripled last year compared to 2020. Young residents of China say that frisbee is not only a sport, but also a way to make new friends.

A rare diamond from Yakutia went under the hammer

In Yakutia, 12 fires were put out in a day

Bridge across the Amur to China completed in Blagoveshchensk

Potato holiday will be celebrated in Tajikistan 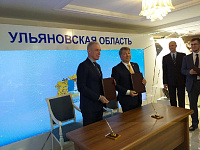