His Highness Sheikh Mohammed bin Rashid, Prime Minister of the United Arab Emirates and Ruler of Dubai, announced on his Twitter account that he had been vaccinated against COVID-19.

He thanked everyone who is working on a vaccine against the virus, noted that he was proud of the development team, and also wished everyone to stay safe and in good health.

Sheikh Mohammed became the highest official to test the vaccine of a Chinese company Sinopharm.

China hosted the third stage of testing, during which about 31 thousand volunteers were involved in the Emirates, Bahrain and Jordan.

Previously, members of the UAE Cabinet of Ministers and doctors were vaccinated who work with coronavirus patients.

In general, since September 2020, more than 480 thousand people from 18 to 80 years old have received the Chinese company's vaccine. In older volunteers, antibodies were formed within 42 days, in young volunteers - in 28 days. Moreover, in volunteers over 60 years of age, less antibodies were formed. The vaccine was also tested by a thousand volunteers with chronic diseases - no complications were recorded. Side effects were described as "simple and expected." 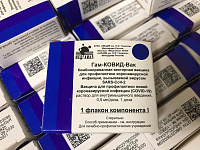 In Yakutia miraculously saved a child in a distant ulus

Kuwait to lift most of covid restrictions from February 20

composition of 120 flowers will be assembled in Chelyabinsk

Experts discussed prospects for economic ties between Russia and Uzbekistan

Sergei Shoigu arrived in India on an official visit

In Yakutia, the state of emergency introduced due to forest fires has been canceled