Three thousand points for vaccination against coronavirus have been established in Tajikistan.

Three thousand points for immunization of the population against coronavirus have been established in Tajikistan. This was announced to TASS on Tuesday by the director of the press center of the Ministry of Health and Social Protection of the Population of the Republic Emomali Mirzoev.

According to him, at the moment The first stage of the vaccination campaign, which began on March 22, will take place only in Dushanbe. “The next stages of vaccination of the population will take place already in the regions, but the timing is not yet known,” the source explained. According to a representative of the Ministry of Health, the Indian-made AstraZeneca (AstraZeneca) vaccine is currently being used.

The day before, President of Tajikistan Emomali Rahmon signed a decree on the phased immunization of the population against coronavirus, according to which the vulnerable will receive the vaccine first population groups. Earlier, the Ministry of Health announced that it is planned to vaccinate 20% of the population: first of all, these are medical workers, people over 60 years old and with chronic diseases. Within the framework of the COVAX mechanism (Kovax) March 9, 2021 Tajikistan received the first batch of AstraZeneca vaccine in the amount of 192,000 doses. The Ministry of Health also reported that the next batches of the vaccine are expected, the total supply will be 1.8 million doses.

At the moment, the situation with coronavirus in Tajikistan is stable: no new cases of infection have been registered since the beginning of the year. At the same time, the authorities of the republic insist on observing precautionary measures - in public places, passenger terminals, in transport, in shops and medical institutions, a mask regime is mandatory. The first 15 infected were identified in the country on April 30 last year. According to the Ministry of Health and Social Protection of the Population of the Republic, the total number of people infected with coronavirus was 13,308 (0.1% of the population of the Republic), 90 people died from complications caused by the infection.
Tajikistan vaccination coronavirus COVID-19 Ministry of Health TASS
|
Facebook
|
Twitter
|
VKontakte
|
Odnoklassniki 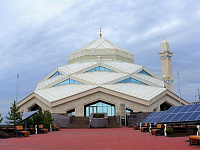 Ashgabat has a new honorary citizen

In Turkey, an unusual student sat at the desk