The Russian Orthodox Church donated a bell to the Lebanese Maronites

The Maronites, the largest Christian denomination in Lebanon and one of the most influential churches in the Middle East, maintain an ongoing dialogue with the Moscow Patriarchate.

The consecration ceremony was conducted by Metropolitan Munir Khairalla, head of the Batroun diocese, the press service of the Moscow Patriarchate specified. After the ceremony, he expressed his gratitude to the primate of the Russian Orthodox Church for his generous gift to the parish.

Parish priest Joseph Matta also expressed his gratitude to Patriarch Kirill. In his opinion, the donated bell symbolizes the paternal love of the head of the Russian Orthodox Church for the Lebanese Maronite Church and embodies "support and protection for the suffering Christians of the Middle East." At the end of his solemn speech, the rector of the church of St. Nokhry, on behalf of all his parishioners, wished the Patriarch good health and long life in his service to God.

Hegumen Arseniy (Sokolov), representing Patriarch Kirill to the Patriarch of Great Antioch and the whole East, spoke at the bell consecration ceremony on behalf of the Moscow Patriarchate . He congratulated all those present on this significant event for the dialogue between the two Churches and expressed confidence that the bell donated by the ROC would strengthen ties between Orthodox Christians and Maronites.

The parishioners of the Maronite Church are the largest Christian denomination in Lebanon and one of the most influential churches in the Middle East. Some orientalists consider her to be the initiator, "platform" and ideologist of the dialogue between Christians and Muslims.

Aviahub intend to create the authorities of Sakhalin 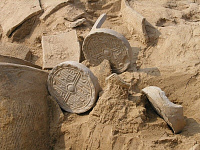 Kyrgyz military take part in the Efes-2022 exercises in Turkey