Kassym-Jomart Tokayev approved a new concept for the construction and development of the armed forces.

The concept includes the basic principles of "construction and development of military security agencies until 2030." “Measures of the concept are aimed at increasing the defense capability of the state, ensuring the combat readiness of the armed forces, other troops and military formations, including expanding opportunities for operations in crisis situations. For the first time in the history of Kazakhstan, it is planned to form elements of an effective system of aerospace and missile defense,” the report says. - transport aviation. Priority attention is also paid to the development of special operations forces. As part of the digitalization of all spheres of life, the potential of the armed forces for operations in the cyber and information space will be increased.

The concept plans to develop "dual-use components", that is, those that can be used both in the military and in the peacetime, including to eliminate the consequences of emergency situations. “This is primarily military medicine, troops of radiation, chemical and biological protection, engineering troops, military transport aviation,” the press service explained. as well as ensuring the security of the population, a gradual transition to the formation of complex military bases with the appropriate infrastructure is planned.

“The main priorities in equipping the armed forces have been outlined. This will be taken into account by the domestic military-industrial complex and will allow enterprises to more effectively carry out long-term production planning. In general, the implementation of this concept is designed to increase the state's defense capability and readiness for an adequate response to modern threats to military security and the effective fulfillment of peacetime tasks," the press service said.
Kazakhstan President Kassym-Jomart Tokayev development armed forces TASS
|
Facebook
|
Twitter
|
VKontakte
|
Odnoklassniki

Novosibirsk and Kazakh universities will launch a joint educational program

Own record was broken by the "egg" master in Turkey

People in China celebrated the New Year in a family way 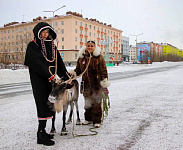 Reindeer took a ride on a shuttle bus around Norilsk

A new inhabitant of the Tongbiguan Nature Reserve