Authorities clean up after earthquake in Sichuan province

A magnitude 5 earthquake hit Sichuan province, 1 point.There were no reports of casualties or injuries, according to local authorities. Earthquake was recorded in Xingwen County, Yibin City.According to seismologists, the earthquake was located at a depth of 10 kilometers. 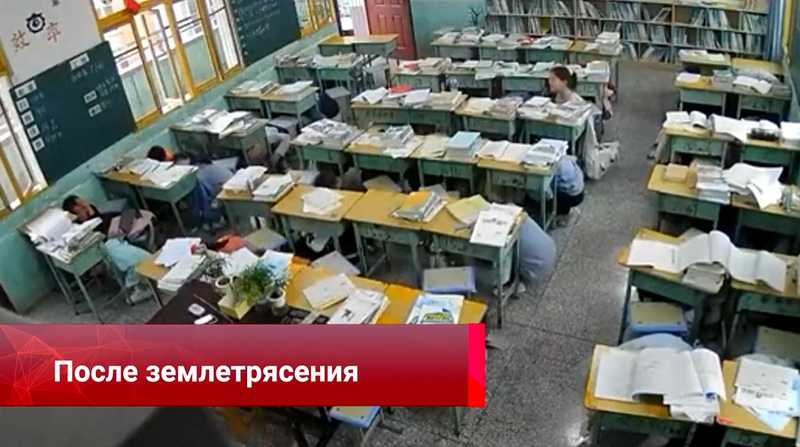 < br> There are many villages within a radius of only five kilometers from the epicenter.645 residential buildings were damaged to varying degrees, 1045 people had to be evacuated. Local authorities immediately sent rescue teams, firefighters and doctors to the affected areas.

rescue work, no casualties. We will stay here on duty. If there are aftershocks, we will be able to carry out a rescue operation as soon as possible.”

Traffic was stopped at two sections of the regional motorway. Five rural roads were damaged. They are already being renovated. At the same time, a comprehensive inspection of objects for which geological shifts can be especially dangerous began in Xingwen County. These include primary and secondary schools, kindergartens, water utilities and coal mines. 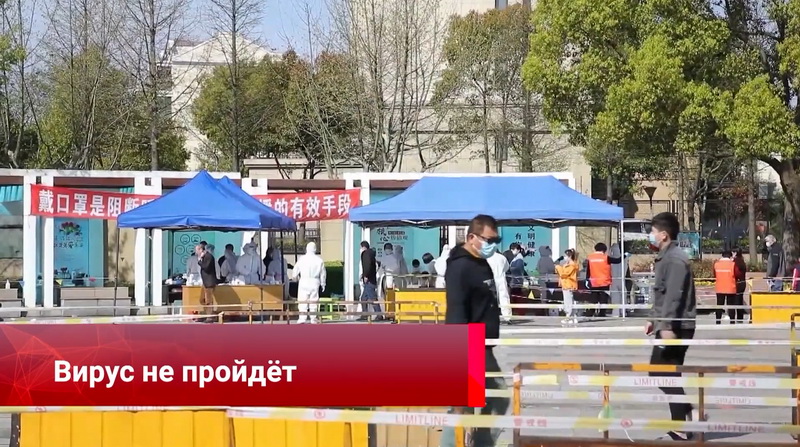 “Based on the results of the first phase of research, the team of the Shanghai COVID-19 Epidemic Prevention Group decided to conduct a new phase of PCR testing for all residents of the city . We will collect all positive results and check them again.”

results. The study of analyzes was carried out by a special method in which ten samples are placed in one test tube. This made it possible to complete a large-scale survey faster. 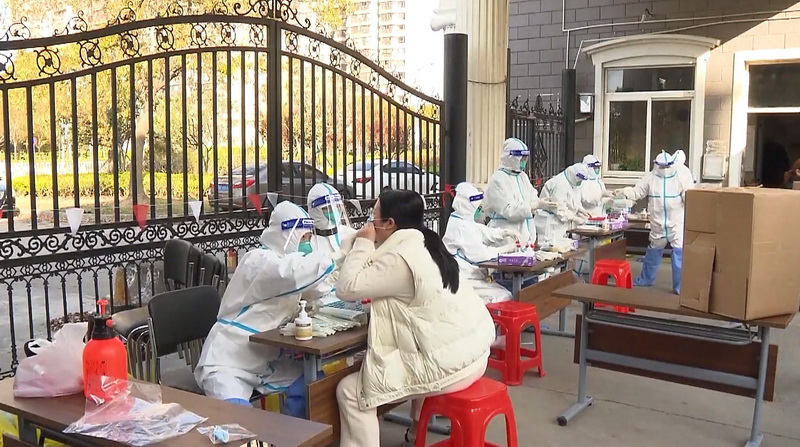 “During this outbreak in Shanghai, almost 135,000 people were in close contact with the sick, all of these people were in quarantine. More than 117,000 people have already tested negative, and the rest are still being tested. Secondary contacts, i.e. there were about 114,000 people who could have been in contact with the sick, and these citizens were also in quarantine. Nearly 109 thousand have already received negative results. The rest are under testing.” 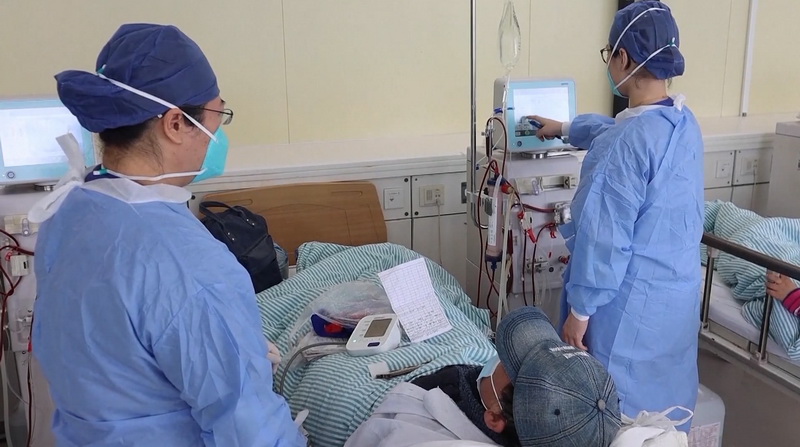 People with disabilities and elderly residents of Shanghai were retested at home. In order for other citizens to have less contact with each other, the authorities provided essential goods to all those in need during the new round of testing. Delivery service employees must strictly observe anti-epidemic restrictions. 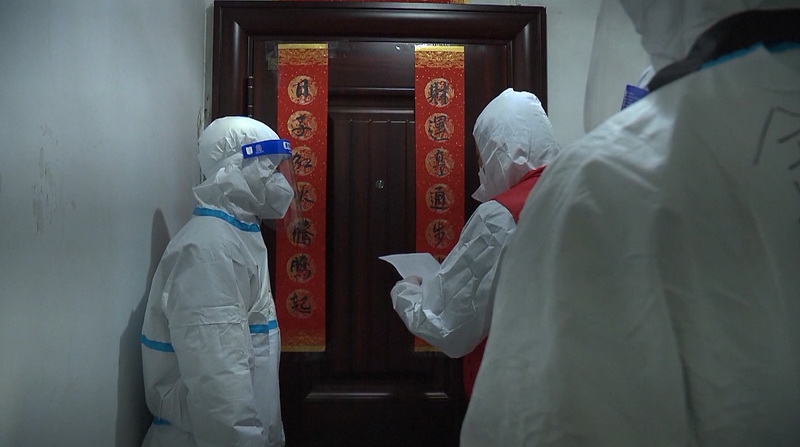 Jinjiang and Nan'an – two cities in Fujian province - connected by a 9-kilometer bridge across the Anhai Bay. One and a half kilometers - a section above the water. It will be a key link in China's first high-speed railway crossing the sea. Previously, long-span bridges were designed in such a way that trains had to slow down on them. The new path is constructed differently. 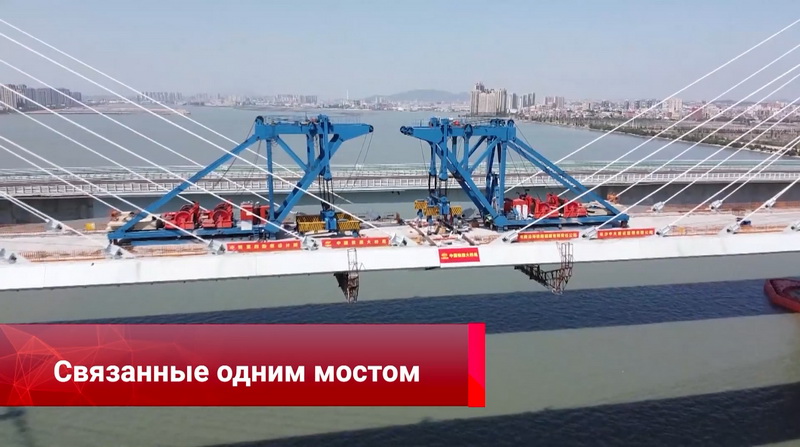 “Laying ballastless tracks on a long-span bridge places very high demands on construction. We constantly analyzed all the data, corrected them. This made it possible to ensure the required shape of the bridge line and the quality of the structure.”

Fuzhou-Xiamen is an important coastal section of the Eight Vertical and Eight Horizontal high-speed rail network. The movement on the new segment will begin next year. And then the travel time between cities will be reduced from one and a half to one hour.


A mobile laboratory for processing tests for COVID-19 was deployed in the resort town of Sanya
An automated laboratory for processing tests for coronavirus was sent to the tourist city of Sanya on Hainan Island.
This decision was made after several cases of a new strain of COVID-19 were registered at the resort. After debugging the equipment, the mobile laboratory was put into operation. The new facility will help expand the capabilities of rapid nucleic acid testing. 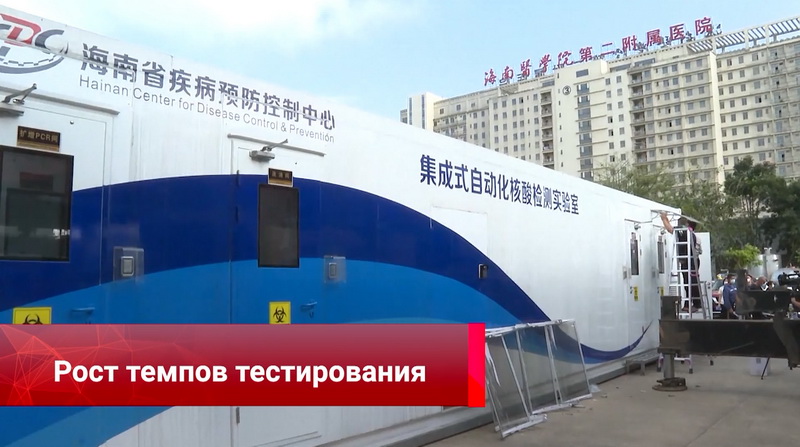 He Jian, Deputy Director of the Center for Disease Control and Prevention, Hainan Province:
“There are four professional technicians working in the mobile laboratory. We can process up to 5,000 tests per day.”

To date, nine confirmed cases of COVID-19 and 15 asymptomatic patients have been recorded in Sanya City.
< br> 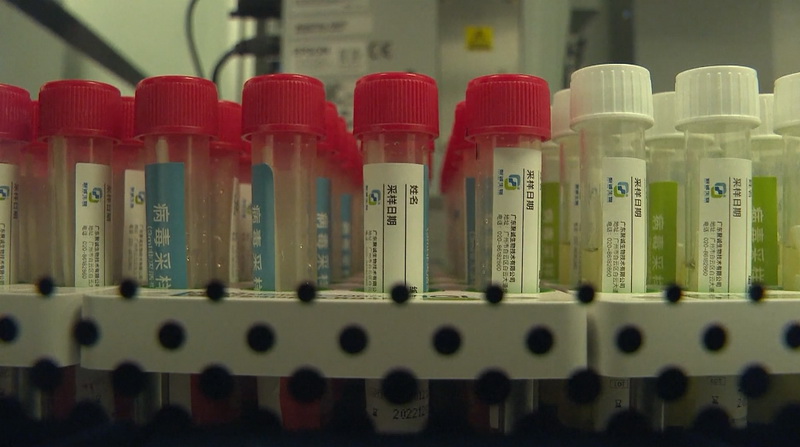 More and more consumers in China are concerned about how to get rid of old technology so as not to harm nature. Trade-in programs come to the rescue: customers can return their phone and buy another one at a discount.

This service is offered by electronics stores and special Internet platforms. This option is now chosen by more than 70 percent of buyers as it is cost effective and ensures that old equipment is reused or disposed of in an environmentally friendly manner.

“I have been using my old phone for over two years. I handed it in and received a discount of 4,000 yuan, - said one of the customers. - This is a good deal, because I paid only half of the price for a new one. cost". 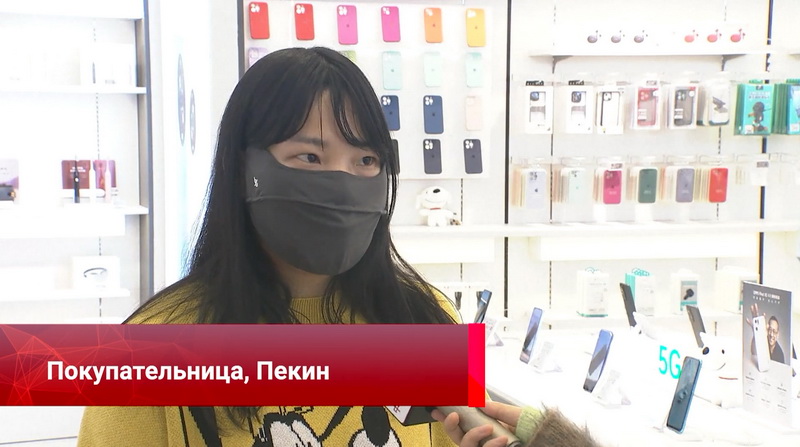 “Storing old phones is a waste of resources,” says another buyer, a resident of Beijing. - In addition, their batteries may pollute the environment. I recommend everyone to take their equipment for recycling.”

The new trend has also attracted major smartphone manufacturers. For example, Huawei and other companies offer the exchange of gadgets not only in communication stores, but also at home. Delivery and replacement of phones will be carried out by a courier. This service has become especially popular during the pandemic. Used electronics online store reports business boom. 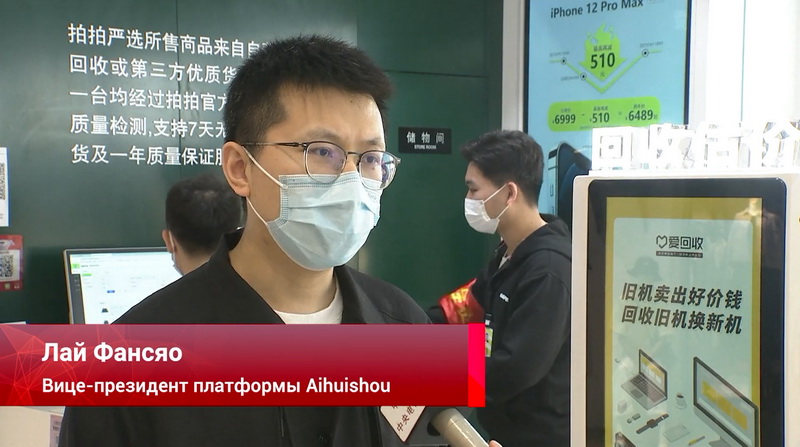 Lai Fangxiao, Vice President of Aihuishou Platform:
“Since the start of the pandemic, both the supply and demand for used phones have skyrocketed. Last year, the growth rate exceeded 60 percent, which is a very high rate.”

According to statistics, the number of mobile phone owners in China exceeded one and a half billion people at the end of 2021. 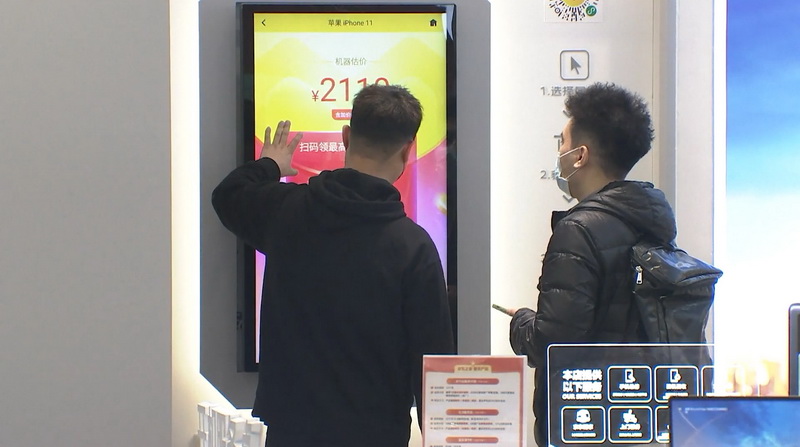 The number of patent applications from Chinese companies reached a new record last year. Only in European countries, inventors from the Middle Kingdom filed more than 16,600 applications. This is about 9% of the total number of requests. The statistics are provided by the patent office of the continent. 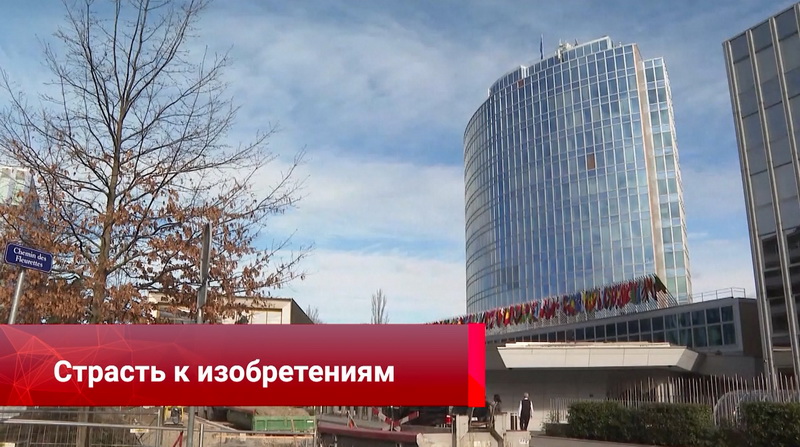 China has become the leader among the top 30 countries that regularly file patent applications, including the United States, Germany and Japan.
Chinese tech giant Huawei has filed more than 3,500 patent applications last year. Most of them are related to the field of digital communications. According to this indicator, it is ahead of all other companies, including Samsung and LG from South Korea.

Over the past 10 years, the number of patent applications from Chinese companies has quadrupled, and this is not the limit for growth . The inventions cover such areas as digital communications, computer technology, electric vehicles, scientific equipment and energy resources. For the first time, six leading companies from the Middle Kingdom were also included in the top 50 patent applicants. 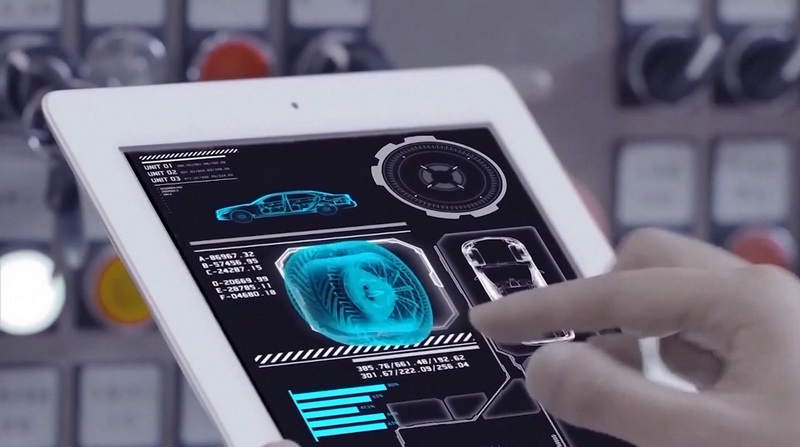 Camping has become a popular leisure activity in China

Three-day Qingming holiday weekend, warm weather, nature awakening from winter sleep - many Chinese people went to campsites to enjoy all the delights of the coming spring . 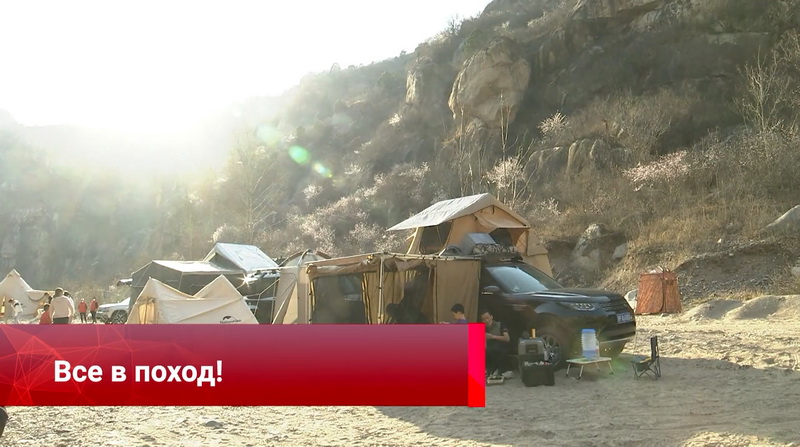 Chang Zhixin, head of the campsite:

“We planned to host about a hundred or two hundred people during the Qingming Festival, but this year we about 500 vacationers left.” 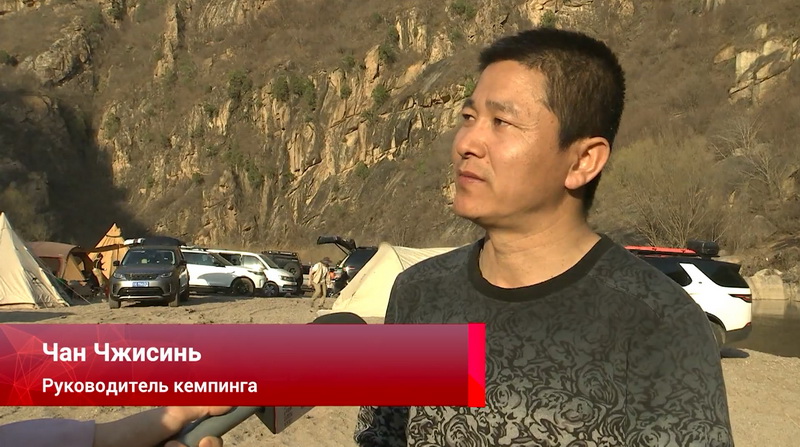 Travel agencies say that camping equipment was booked three times more often during the holidays than last year. There is also a rush in retail stores of tourist equipment. More and more individual and comfortable things are offered in the market of goods for outdoor activities. 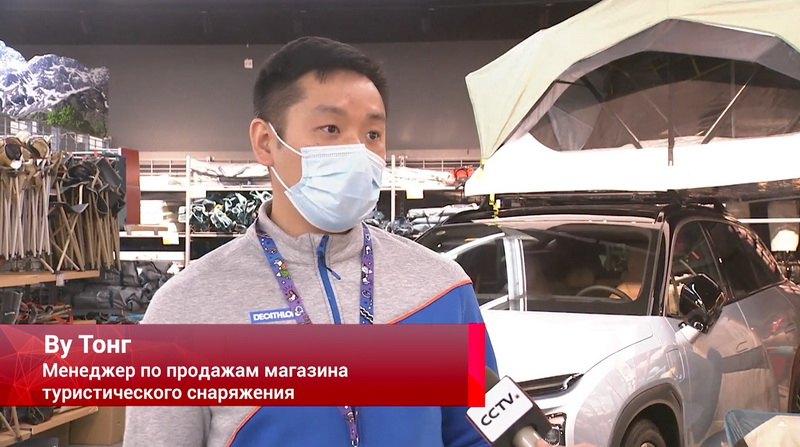 In the context of the fight against COVID-19, short-term tourist trips have become an interesting and comfortable alternative long interregional trips that require a lot of certificates and documents. 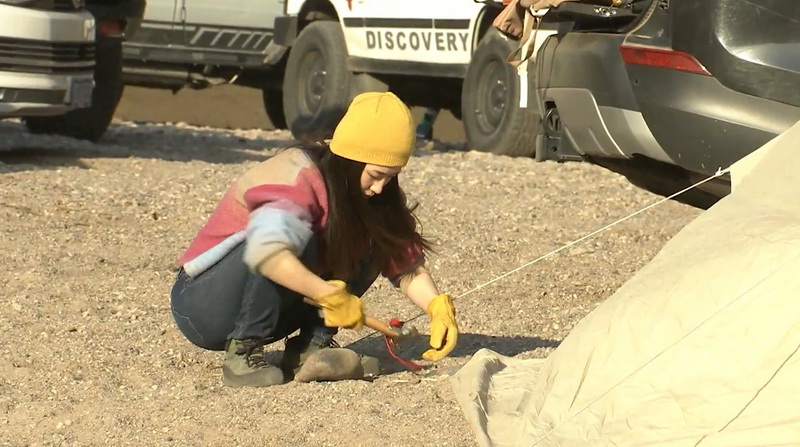 The premiere of the experimental choreographic performance "The Discovery of the Body" is coming up in Guangzhou. It is based on the concept of energy flows. 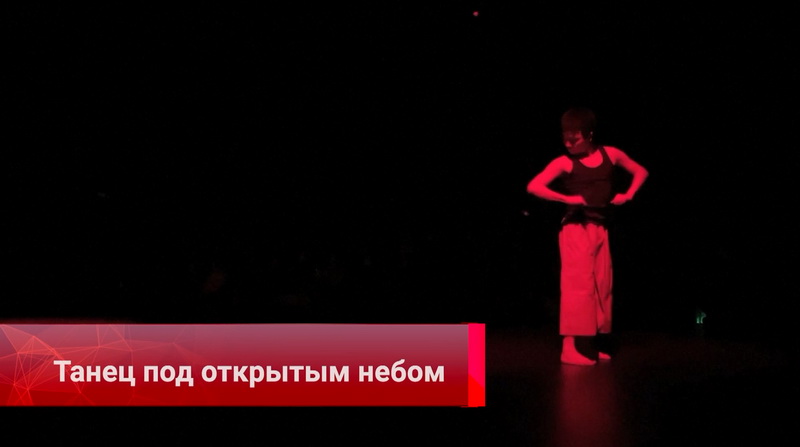 The author is an outstanding Chinese dancer and choreographer Hou Ying. After graduating from the Beijing Dance Academy in 1993, she worked for many years in Europe and the United States. And in 2008 she returned to China to work on the choreographic miniature "Drawing", which opened the Summer Olympic Games in Beijing. In 2009  Hou Ying founded the modern dance theater that bears her name.

Hou Ying, choreographer:< br>
“I have always had a dream. Since I returned to China, I have regularly held dance workshops. But they are not enough to train qualified dancers. Therefore, last year I opened a modern dance school with long-term training. Now we are ready to show the audience the result of our work.” 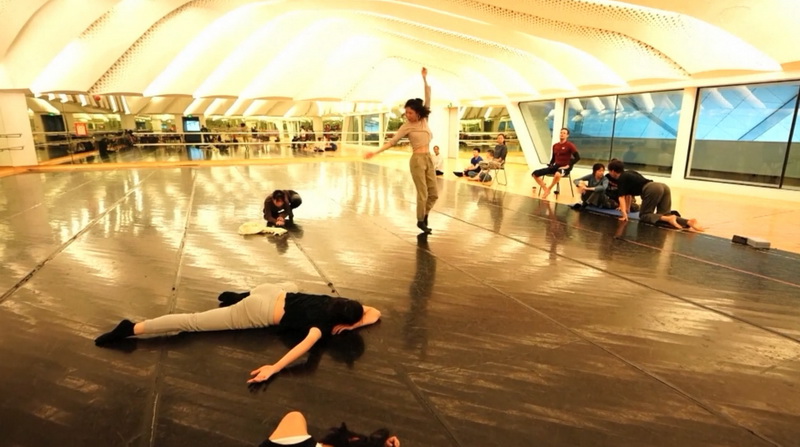 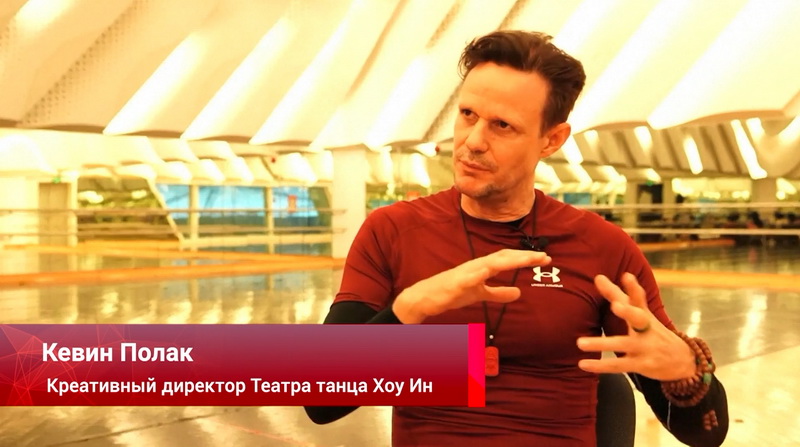 < i> “I think that the project that was born during the training is very good. What we teach immediately translates into performance. This is very useful for young dancers." 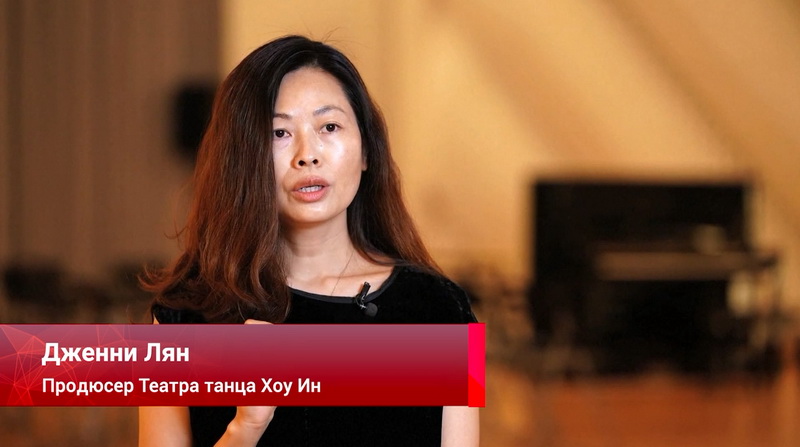 “This year we have focused on an interdisciplinary approach. We no longer mean only drama by the word "theater". We want to cover as many areas as possible, including different genres of dance, music and opera.”

An unusual patient sought help at the Mengla County Medical Center in Yunnan Province. A fluffy animal with big sad eyes and an injured front paw sat sadly at the entrance to the hospital and waited for Dr. Aibolit to cure him. Since there were no veterinarians in the staff of the hospital, the staff called the forest police. Law enforcement officers immediately arrived and took the animal to their department to figure out what kind of species it was and how to help the animal. 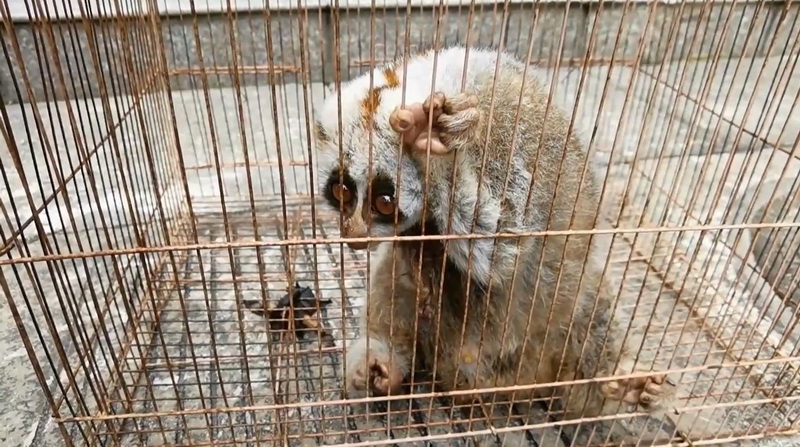 "We studied animal species maps, consulted with experts, and determined that this is a red slow loris." 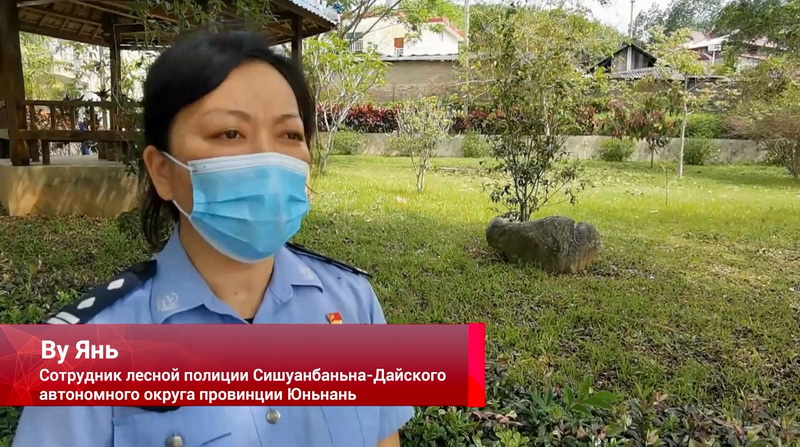 The police gave the big-eyed animal a drink and provided first aid to the veterinarian. Closing his eyes, Lori patiently endured all medical manipulations. After that, the animal was transported from the police station to the local wildlife rescue center. Now the fluffy is feeling much better and is already on the mend. The red slow loris is found in China only in Yunnan and Guangxi Zhuang Autonomous Region and is under first-class state protection.

Putin congratulated the President of Turkmenistan on Independence Day

Once a week, planes from Russia will fly to 4 more countries 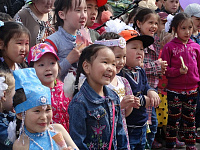 Eight kindergartens to open in Yakutia

Ural Airlines will fly from Yekaterinburg to Magadan 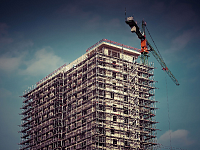 China has begun the reconstruction of 47.3 thousand residential complexes