The Moscow Compatriot House organized a video conference “Remember: you are a hero!”

Evgenia Borovaya tells about the most interesting events in the life of Russian compatriots living abroad.

See in the issue:

An online conference was held on the platform of the multimedia press center of MIA Rossiya Segodnya to discuss the situation with respect for the rights of Russians and compatriots living abroad . The experts analyzed the revealed facts of violation of their civil, political rights and freedoms in 2020. Leonid Slutsky, Chairman of the Russian State Duma Committee on International Affairs, proposed to create a system for tracking, responding and helping Russians who are in trouble outside the country in the near future. 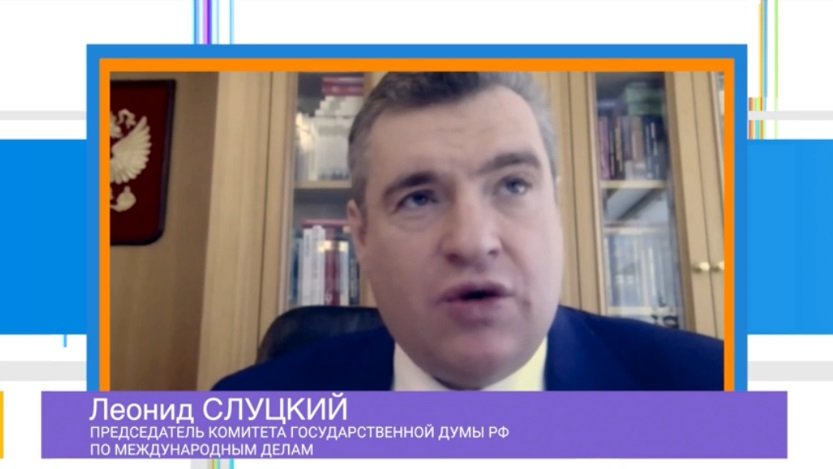 of his office, Tatyana Nikolaevna Maslyakova, as well as, of course, the Human Rights Council under the President, and those structures that are participating in our meeting today and which for various reasons could not attend, we can to create such a system in a short time,” said Leonid Slutsky.

Alexander Brod, a member of the Council under the President of Russia for the development of civil society and human rights, said that there are more and more applications to the Council. He suggested creating a coordinating group to monitor the facts of discrimination against Russian citizens abroad under the Ministry of Foreign Affairs of Russia.

lawyers from different countries and could also defend the rights of our fellow citizens through public speaking, participation in courts. - said Alexander Brod. - This is support for specialized NGOs that have proven themselves in protecting rights, this is the regular publication of expert reports on violations of the rights of Russian citizens and compatriots abroad and their regular presentation at the UN platforms, OSCE, the Council of Europe, UNESCO and other international organizations.”
The participants of the discussion noted that when protecting the interests of compatriots, it is necessary to take into account geopolitical processes, and it is also necessary to improve coordination between the structures dealing with the problems of this category of citizens.
< br> 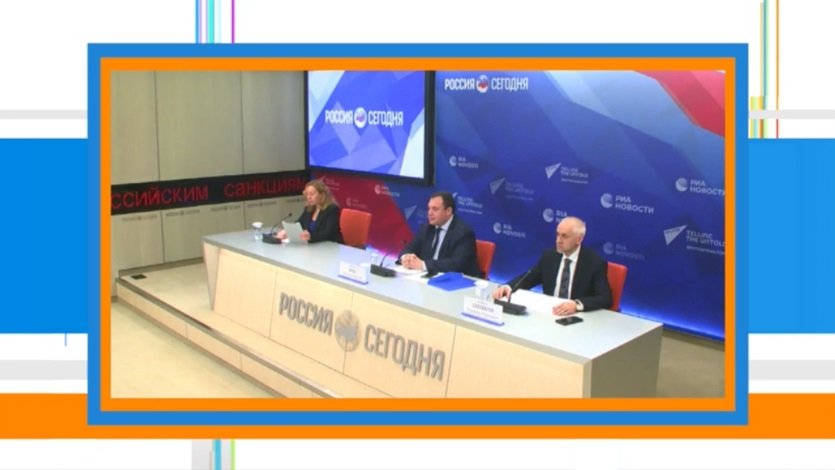 titled "Remember: you are a hero!" united the inhabitants of many countries of the world. The virtual meeting dedicated to the Defender of the Fatherland Day was organized by the Moscow House of Compatriots together with the Rostov Patriotic Movement "Roads of Glory - Our History" and the Representative Office of Rossotrudnichestvo in the Republic of Cyprus. Participants from Greece, Israel, Poland, Serbia, the Czech Republic and other countries joined the conference. Yulia Trishina, representative of the Moscow House of Compatriots, told our TV channel more about the event.

“The Moscow House of the Compatriot has long and successfully cooperated with the Rostov Movement. Compatriots abroad and young people take part in our common projects. And at this conference, we outlined the events, the key theme of which is the 80th anniversary of the start of the Great Patriotic War, - said Yulia Trishina. — These are conferences, round tables, lectures, sports marathons. Anything that would be of interest to young people. Within the framework of the conference, a “Lesson of Courage” was held, which, first of all, was aimed at schoolchildren and students. We wanted to once again draw the attention of young people to the heroic story, but so that it would not be a dry summary of the chronicle. And we succeeded.” 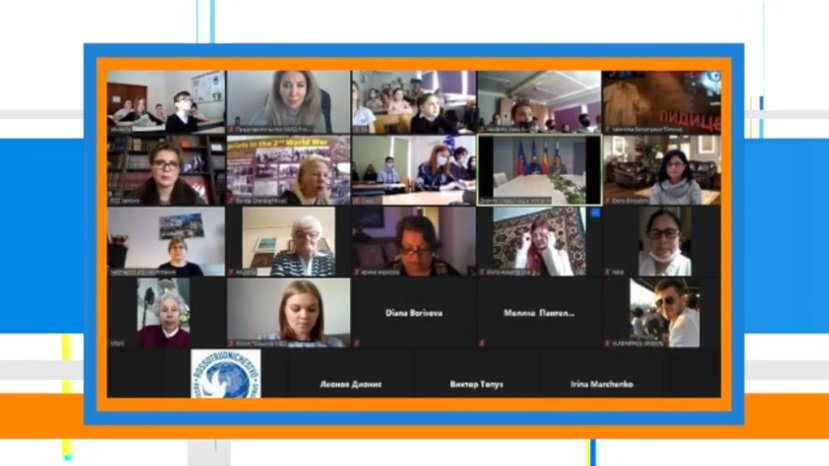 The conference was also attended by eyewitnesses of those events - the children of the war from Cyprus and Spain, and thanks to the volunteers of the victory of the Rostov branch, a video recording of the memories of veterans of the Great Patriotic War was provided.


The Days of Russian Culture took place in Buenos Aires. In the garden of the National Museum of Decorative Arts, guests were presented with an art exhibition dedicated to the ballet The Nutcracker by the great Russian composer Pyotr Ilyich Tchaikovsky. The event was organized by the Representative Office of Rossotrudnichestvo together with the gallery of contemporary art "Torres Barte". The idea was supported by the Embassy of Russia and the Ministry of Culture of Argentina.  The Ambassador of Russia Dmitry Feoktistov spoke at the opening. He admitted that he dreams of bringing our friendly peoples even closer.

we have a language barrier and other obstacles. At such moments, I remember Tchaikovsky and understand that nothing is impossible,” Dmitry Feoktistov expressed confidence. 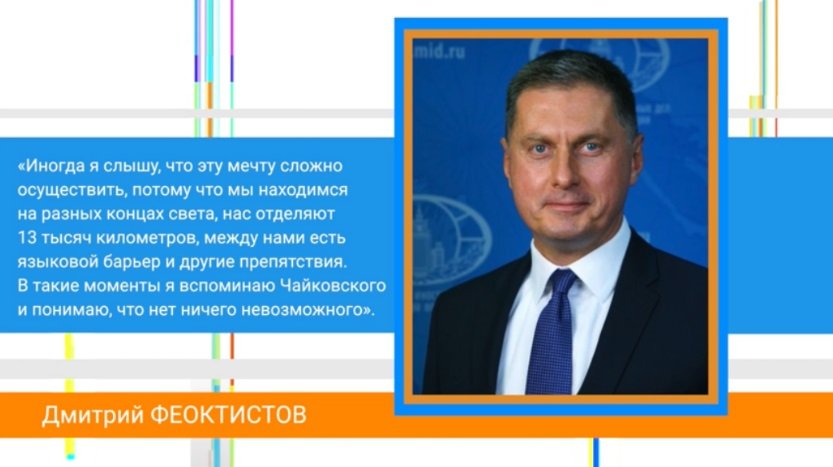 In turn, the Minister of Culture of Argentina Tristan Bauer< /b> noted that Russian culture, painting and music were of great importance in the history of the republic and serve as a "bridge of friendship and brotherhood." The preparation of the exposition was carried out throughout 2020. According to all the speakers, the exhibition made a special contribution to the development of Russian-Argentinean cultural and humanitarian ties.


British students prepared an online concert, the program of which was based on the performance of Russian poems and songs. The action was organized by the Representative Office of Rossotrudnichestvo in Great Britain and Northern Ireland. The purpose of the concert is to unite people who study the Russian language and instill a love for Russian culture. Despite the different levels of language proficiency, the students of Durham University performed the Russian-language repertoire with pleasure. There were songs by Bulat Okudzhava, poems by Yulia Drunina. And the first-year students sang the song "If you don't have an aunt" from the movie "The Irony of Fate, or Enjoy Your Bath!" in unison.
You can find more news on the bigasia.ru website in the "Compatriots" section. We will continue to keep you informed of events in the life of Russian compatriots living all over the world.

The program is being created with the support of the Department of Foreign Economic and International Relations of the City of Moscow. 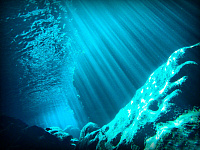 Russia and Iran to cancel individual visas for group tourists

Saudi Arabia to conduct Hajj in a 'safe' format 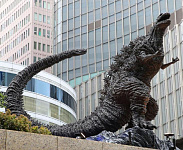 Monument to Godzilla unveiled in Tokyo