Four schools will be built in Adygeya in the Takhtamukaysky district, bordering on a million-plus city.

The authorities of Adygea plan to build four schools in the next two years in the Takhtamukaysky district, located in close proximity to the million-plus city of Krasnodar, head of the republic Murat Kumpilov said on his Instagram account on Friday.

"With the support of the government of the Russian Federation, in recent years a number of large-scale projects have been implemented in the republic to develop the education system, build new modern schools. We will continue this work. We will pay special attention to the Takhtamukay district, where the population density is highest in the republic. A decision has already been made to build there in four new schools in the next two years," he wrote.

In the urban-type settlement of Yablonovsky, which is separated from Krasnodar by a bridge, two new schools will be built - for 1,100 students each. Their construction will begin in 2022 and 2023. Also next year it is planned to build a school for 1.1 thousand places in the village of Novaya Adygeya. At the same time, construction work should begin in the village of Starobzhegokai.
"I visited the village, examined the existing school and the territory allotted for the construction of a new school for 250 places. During the on-site meeting, I set the task of preparing the necessary documentation as soon as possible in order to start to the construction of facilities. It is important that the implementation of these projects will significantly reduce the load on existing schools. At the same time, active participation in the national project "Education" gives us a conceptual solution to the task of the President of the country to switch to a one-shift mode of operation of schools," the head of the republic added.

Earlier it was reported that the authorities of Adygea plan to build five new schools by the end of 2024, as part of the implementation of national projects over the past three years, four schools have been built in the region for more than 3.4 thousand student places. The construction of new schools will eliminate two-shift education in the region. Currently, about 10 thousand children study in the second shift in Adygea.
Russia Adygea building school education TASS
|
Facebook
|
Twitter
|
VKontakte
|
Odnoklassniki

A new bridge across the Solzan River was opened in Baikalsk 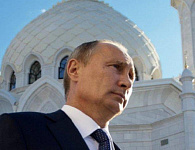 Nevinnomyssk Azot will be engaged in the production of medical oxygen

The most original snowman will be paid for in Astana

A resident of Ufa thanked the National Guard 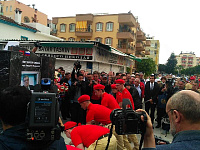 The best teacher of the Russian language was determined in Armenia

RDIF expects WHO to approve Sputnik V in autumn