As part of the trip, he opened a new building of the Office of the Russian Guard in the Ryazan Region, located in the city center, and the Center for Licensing and Permit Work. Also, the director of the Russian Guard, together with the governor of the Ryazan region Nikolai Lyubimov and the chief federal inspector of the region Mikhail Maksimov, inspected the premises of the regional administration and the center.

Comfortable conditions have been created in the new center for visitors, it is equipped with modern electronic queue terminals, reception windows for citizens and special rooms for storing personal files of weapon owners and employees of private security companies. All workplaces have access to centralized weapons accounting systems.

The head of the department noted that since the formation of the Russian Guard, overhaul of about one and a half thousand objects for various purposes has been provided, 36 new property complexes have been put into operation.

This year, about forty new facilities are included in the capital construction program, the design and construction of three buildings of territorial bodies will begin.

order of weapons. In particular, posts for cutting, chopping and bending metal are installed in this room, after which the scrap metal is handed over for remelting.

General of the Army Viktor Zolotov stressed that the employees of licensing and permitting work make a worthy contribution to ensuring security in the Ryazan region.

Every year, employees more than 15 thousand state services in the field of arms trafficking and private security activities provide licensing and permitting work of the regional department of the Russian Guard. Since the beginning of 2021 alone, over 500 weapons and more than 3,000 rounds of ammunition have been confiscated for various violations.

The head of the department presented state and departmental awards to distinguished employees of the units of the Directorate of the Russian Guard in the Ryazan Region. He noted the important role of employees and military personnel of the department in solving everyday security problems in the region.

The governor of the Ryazan region Nikolai Lyubimov also presented awards to employees and military personnel. He noted that thanks to the decision of the leadership of the Russian Guard, a complex of repair and restoration work was completed this year. They made it possible not only to create a reliable structure, but also to transform the appearance of a unique historical building: facades, decorative elements.

Nikolai Lyubimov expressed gratitude to the National Guard for their careful attitude to the history of the city of Ryazan, its heritage and

During the trip, Army General Viktor Zolotov visited the Alley of Heroes, where he laid flowers at the monument to employees and servicemen of the National Guard who died in the line of military and official duty.
< br>
Russia Russian Guard Center for Licensing and Permit Work
|
Facebook
|
Twitter
|
VKontakte
|
Odnoklassniki 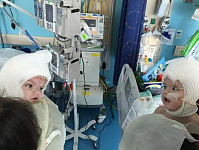 In India, Siamese twins saw each other for the first time after separation surgery

250 "smart" stops will appear in Novosibirsk 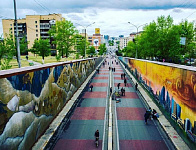 Mongolia bans cars for one day 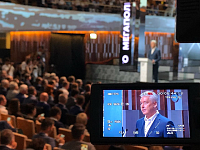 Sergei Sobyanin: “The main wealth of cities is people!”

More than 100 countries have approved the use of Chinese vaccines

Ministry of Emergency Situations of Andijan masters the profession of matadors