Technologies of the future, planes are back in the sky, on guard of water safety, night cycling – see "Chinese Panorama" -209

China's digital economy has reached the second place in the world

The share of the digital economy in China's GDP has increased to almost 40%. At the same time, over the past five years, the volume of the country's digital economy has grown by almost 70%, exceeding 45 trillion yuan.

The data was released by the Cyberspace Administration and the Ministry of Industry and Informatization of the People's Republic of China at a press conference on the eve of the Digital China Summit. It will be held on July 23 and 24 in Fuzhou, Fujian Province. The event will be held with the support of the Ministry of Industry and Informatization, the Cyberspace Administration and the Fujian Provincial Administration. The summit will focus on global shifts related to digitalization and the introduction of innovations within the framework of the Digital China Initiative.

This year, China's civil aviation industry has faced difficulties due to large-scale quarantines and a decline in business activity. As the COVID-19 pandemic recedes, more planes are taking to the skies. In June, the number of domestic flights increased from 6,000 to 10,000 per day. Passenger traffic has also increased, now almost 900 thousand air passengers move around the country every day.

Fu Lihong, Deputy CEO of China Southern Airlines:
"China's domestic flight volume has recovered by about 70 percent from pre-pandemic levels. We are gradually increasing the number of flights and plan to reopen five routes, including the flight Shenzhen - Moscow. There will be new flights to Cambodia and Myanmar. Already today, the number of flights of our company has recovered by about 90 percent."

China has relaxed strict measures to control the movement of citizens, and travel has become easier. So, in the QR code of health, which every person has, a special note was removed about how many cases there are in the regions that he recently visited. Industry experts believe that after that they will book flights more often.

Meanwhile, the quarantine period for foreigners who enter the country has been reduced from 3 weeks to 10 days. Thanks to this, more international flights appeared in the airport schedule, and foreign students began to return to China.

In Hubei Province, the construction of canals has begun to transfer water from the Yangtze River to the Hanjiang River. This is part of a large-scale project to provide water to the arid regions of northern China.

The water intake from China's longest Yangtze River will run along the eastern, western and middle lines. The middle route is the most important, as it supplies water to Beijing. It originates in the Danjiankou Reservoir on the Hanjiang River in Central China. The water supply through it began in 2014. The western and eastern lines will become additional.
The total length of the project is 195 kilometers, and the volume of annual water intake will be almost 4 billion cubic meters.

Lee Yun, Director of the Water Diversion Department under the Ministry of Water Resources:
"The total investment in the project is 58 billion yuan. The connection of two strategic water sources, the Yangtze and Hanjiang Rivers, will improve infrastructure and play an important role in ensuring China's water security."

Since the average route for water supply to Beijing was launched in 2014, the water supply of the northern regions has improved significantly. However, it later turned out that during the drought, the Hanjiang River and the Danjiangkou reservoir become shallow and cannot guarantee the supply rate of industrial and drinking water.

The project of transferring water from the south to the north will be a lifeline. Issues with providing residents with drinking water and restoring the ecological environment of rivers and lakes will be resolved immediately. It will also have a positive impact on the region's economy.

The city falls asleep - cyclists wake up. Young citizens all over China have a new hobby - cycling after sunset. This activity has become popular because at dusk the urban landscape opens up from a new side.

"When the sun rises again, the landscapes of Beijing will look completely different," says a cyclist named Zhang.

Night skiing has caused an explosive increase in sales in sports stores. High prices for road bikes and equipment do not stop enthusiasts.

Hye Dong, bicycle store manager:
"The prices for a road bike can range from 5,000 to 100,000 yuan. And because of the high demand, popular models are no longer in warehouses in many cities. Our bestseller is a bike that costs 15,000 yuan. The average monthly turnover of the store is 1.5 million yuan. But last month the turnover was almost 3 million yuan."

According to market participants, bicycle sales have increased three and a half times this year.

Yakutia will host the "Russian Creative Week" in 2023 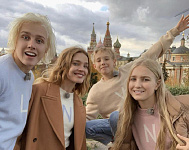 "Russian vacation" supermodel will begin in the Caucasus

In Khakassia, they decided to create a center for the restoration of the population of the Przewalski horse

In Manisa, fleeing the coronavirus in a treehouse