SpiceJet will fly from Delhi to Alma-Ata

This was reported by the Ministry of Industry and Infrastructure Development of Kazakhstan.

The civil aviation committee of the republic issued a flight permit to the budget air carrier SpiceJet, the Regnum news agency reports.

< td> China will provide a loan
$300 million to Kazakhstan "The Indian airline SpiceJet has passed the relevant procedure and received a certificate of accreditation of a foreign air carrier in the Republic of Kazakhstan," the agency said.

The committee also stressed and that the opening of the route will improve trade and economic relations between the countries, the transit potential and the tourism industry of the republic.

It is expected that the company will operate flights on the route Delhi -  Boeing-737 up to six times a week.

Since 2018, a 72-hour visa-free regime has been in effect for Indian citizens transiting through Kazakhstan. Such a measure made it possible to increase the number of such passengers by 45% compared to 2017 and reach 900 thousand people.

Russian ships made a business call to the Syrian port

Bukhara City to be built in Bukhara 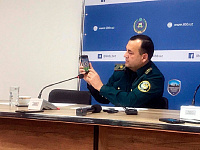 "GUVD-phone" will be received by the policemen of Tashkent