Sochi tourist train to resume flights to Gagra from April 30

It will depart from Tuapse on Mondays, Thursdays, Fridays, Saturdays and Sundays.

Tourists are also invited to make a trip along a shortened route - between Gagra and Sochi, departing from Gagra on Mondays at 18:50 Moscow time, and from Sochi on Wednesdays at 08:05 Moscow time

The train includes SV carriages, reserved seat and compartment carriages, carriages with seats, as well as a dining carriage, the interior of which is stylized as the 80s of the XX century. The carriages of the retro train are equipped with modern sanitary facilities, air conditioners, sockets and USB sockets for charging mobile devices. Passport control on the way across the state border will be carried out directly in the cars. Passengers are also given the opportunity to extend their stay in Abkhazia and visit excursions that can be booked on the train. Tours for one and two days have been prepared.

A new cable car will open in Sheregesh

Japan Airlines will fly to Primorye

A campaign to legalize foreign cars has been launched in Kazakhstan

Russia, India and China marched in the same formation on Navy Day 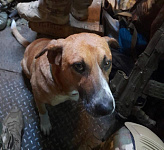 A Russian guardsman brought home a rescued dog from his home

Russia comes out of quarantine