Shanghai authorities have eased the quarantine for more than 12 million people in the city.

Shanghai authorities have decided to relax quarantine for more than 12 million residents and continue to gradually ease anti-COVID restrictions in the city as the number of new carriers of the disease is reduced, but at least 11 million people still cannot leave their residential compounds. This is evidenced by the data that were presented on Friday at a regular press conference of the local administration on the epidemic situation in the city, where about 25 million people live.

A few weeks ago, the authorities divided all residential and office complexes in the city into three categories: closed, controlled and preventive. In closed apartments, people do not have the right to leave their apartments; in controlled ones, it is forbidden to leave the territory of the residential complex. As for preventive measures, theoretically, residents can go out into the city within the designated zone.

According to the data presented at the briefing, over 13.9 thousand residential complexes with more than 5 .2 million people. More than 22.9 thousand compounds with a population of more than 5.9 million people have been added to the category of controlled.

Prevention zones (no cases of covid for fourteen days in a row) in Shanghai now number more than 44 thousand. Over 12 live in them, 3 million people who are theoretically allowed not only to leave their apartments, but also to leave the territory of residential compounds. However, in practice, the decision to open a compound, regardless of its status, is made by the local district authorities, depending on the population density in each particular area, in order to avoid crowding on the streets and cross-contamination. As corr. TASS is one of the residents of such a compound, they are not yet allowed to leave the residential complex, despite the fact that there have been no cases of covid for almost a month.

mid-March, a total of over 500 thousand infected people were detected in the city, of which more than 90% are asymptomatic carriers of covid. The city has been officially in full lockdown since March 28, but some areas of the metropolis were closed in the middle of last month.
China Shanghai coronavirus COVID-19 pandemic quarantine residents TASS
|
Facebook
|
Twitter
|
VKontakte
|
Odnoklassniki

Ancient alcohol discovered at the bottom of the Baltic Sea

China donates another batch of vaccine to Syria

MiG-31 successfully shot down another MiG in Kamchatka 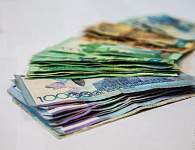 Disability benefit to be increased in Kazakhstan