Several schools in Azerbaijan will return to full-time education

In-person classes in schools are partially resumed in Baku and three large cities of Azerbaijan.

Full-time education is partially resumed from Monday in secondary schools in Baku and three large cities of Azerbaijan after a break of almost a month and a half. This decision was made by the Ministry of Education of the country, taking into account the improvement of the epidemic situation in the country.

To reduce the risk of the spread of the virus, the school week will be incomplete. In particular, as specified in the Ministry of Education, in Baku, Sumgayit and the Absheron region adjacent to the capital, primary school students will attend classes three times, and students in grades 5-9 - twice a week. In the cities of Ganja and Sheki, face-to-face classes for students in grades 1-9 will be held five times a week, but only in those schools where it will be possible to maintain a minimum distance of 1.5 meters between students. If it is impossible to adhere to this condition, then face-to-face classes will be held only three times a week.

Face-to-face classes are also resumed in special schools and boarding schools in Baku, Sumgayit, Ganja, Sheki and the Absheron region of the republic, they will be held five times a week. week. At the same time, students in grades 10-11 remain on distance learning.

Schools during the pandemic

classes in general education schools, secondary specialized and higher educational institutions, pupils and students were transferred to distance learning. Classes resumed on September 15, when the school year begins in the country, but were again suspended from mid-October due to the worsening situation with the spread of infection. Once again, full-time education in the country's comprehensive schools was gradually resumed from February 1 this year, but two months later - on April 5 - schools in Baku, Sumgayit, Ganja, Sheki and the Absheron region were closed due to a sharp increase in the number of infected people.

Compared to April, when an average of 2-2.5 thousand cases of infection per day were recorded in Azerbaijan, a significant decrease in daily growth is observed in May. During the last week, this figure ranged from 300 to 550 cases. On January 18, the country began vaccinating the population against coronavirus. Immunization uses CoronaVac & nbsp; Chinese company Sinovac Biotech and Vaxzevria British-Swedish company AstraZeneca. In early May, the first batch of Russian Sputnik V vaccine. According to the operational headquarters, almost 1.8 million people, or about 18% of the population, have already been vaccinated in the country. Since the beginning of the pandemic, 329,843 cases of coronavirus infection have been confirmed in the republic, 314,900 people have recovered, and 4,779 patients have died.
Azerbaijan Baku schoolchildren education TASS
|
Facebook
|
Twitter
|
VKontakte
|
Odnoklassniki

Turkey creates an airline to transport tourists from Russia

Muscovites see off the winter by swimming in the hole

Yakutia is a leader in the development of human capital

The Japanese have tested a drone to search for sea poachers 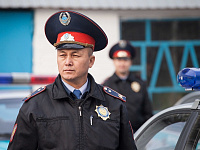 The police of Kazakhstan will change clothes