Among other things, a young resident of Karaganda became the owner of the main prize of the competition held on Instagram.

Miss grand prix Russia is an all-Russian beauty contest, which is held annually. It is attended by contestants from Russia and neighboring countries. In total, there are seven age categories in the competition program. Aisha Abenova from Kazakhstan became the owner of the title of Mini miss grand prix Russia 2018 in the age category of 7-9 years.

Before participating in the capital competition, a young resident of Karaganda had already conquered the jury of the regional competition Mini miss Karaganda 2018. In Moscow, she was to to withstand serious rivalry with other participants, among whom there are already popular models and even TV presenters, Sputnik-Kazakhstan notes.

According to the organizer of the Mini miss Karaganda 2018 contest, Madina Akhmetbayeva, Aisha Abenova's victory is well deserved. In addition to her bright appearance, Aisha has many talents. “Despite her young age, she perfectly dances the lezginka, sings, plays the piano, draws and reads poetry,” the expert noted. 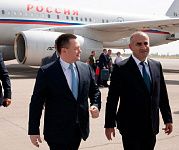 Cinema of the future launched in the UAE

“News. Sevastopol" presented a surprise to the head of "Greater Asia"

Tashkent will increase by 428 hectares

Bicycle infrastructure to be created in Baku

The main stadium of the republic was inaugurated in Karachay-Cherkessia