Russians will be offered charter tours to Dagestan

For the first time, Intourist will launch tours to Dagestan on the basis of charter flights.

At the end of April, the Russian tour operator Intourist will for the first time launch tours to Dagestan on the basis of charter flights, announced on Wednesday at a press conference in TASS the company's CEO Viktor Topolkaraev. < /p>

Intourist is joining the program of tours based on the basis of charter flights - TASS note for the first time), this is our pilot project <...> Together with Rostourism, the leadership of the Republic of Dagestan, the Ministry of tourism and local travel companies, we have developed and launched a tourism product based on the basis of charter transportation, the program starts on 30 April and absolutely will fly until 28 May and  ;with a high probability it will be continued for the summer months, ”said the general director of Intourist.

According to he said, flights to Makhachkala from Moscow are scheduled twice a week on Wednesdays and Saturdays. At the same time, the cost of the tour is 1.5-2 times less than on the basis of regular air transportation. In addition, the company has developed a tour covering several regions of the NCFD - Dagestan, Chechnya, North Ossetia and Ingushetia, its minimum duration is eight days.

As the head of Dagestan Sergey Melikov noted during a press conference, charter-based tours will be in demand and will help to unload regular flights during the tourist season.

“This is important for us, because we experience some difficulties with the availability of scheduled flights due to certain reasons caused by the current circumstances... The Moscow-Makhachkala direction, probably will be the most popular among charters. This not only opens up our republic for Russian tourists, but also removes the critical load from regular flights during the tourist season,  said the head of Dagestan.

About the launch of charter flights in the spring-summer period to Kamchatka and the Caucasus, the head of Rostourism also said earlier Zarina Doguzova. by & nbsp; its & nbsp; words in & nbsp; almost all federal districts of the Russian Federation, and & nbsp; in & nbsp; further, will further expand.

Earthquake in Buryatia called the most powerful in recent decades

Thailand will host a regional conference of Russian compatriots in October 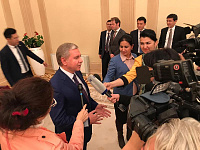 Children in Israel return to school

Israel celebrates the 70th anniversary of the founding of the state