The production of the Chinese vaccine "Convidence" will begin in Russia in 2022.

“I think this is [industrial production of the vaccine will start] after all as early as next [year],” she said.

The director said that the production of validation series of the vaccine is planned to begin before the end of this year. The vaccine will be exported, she noted.

“Production of validation series on the new, fourth [production] line of the Konvidezia product is planned at the plant in Pokrov by the end of this year. Validation is a test of the reproducibility of the process, it is an assurance that by carrying out the same actions three times in a row, you will get the expected high-quality result,” she explained.

Earlier, the press service of the company reported that Petrovax expects the vaccine to be registered in Russia in 2021. According to the results of the third phase of testing the drug, an immune response was developed in 90.6% of volunteers. The maximum capacity of the new production line created at the enterprise will be up to 10 million doses of vaccine per month.

Petrovax is a Russian full-cycle biopharmaceutical company, part of to the Interros group. Petrovax's product portfolio includes its own original medicines and vaccines produced in cooperation with leading domestic and foreign companies, as well as generic drugs. The production complex of the company is located in the Moscow region, its annual capacity is up to 160 million doses of drugs. The company exports drugs to 12 countries, including the states of the EAEU, the Middle East and the EU.
Russia China production vaccine coronavirus COVID-19 TASS
|
Facebook
|
Twitter
|
VKontakte
|
Odnoklassniki

The main stadium of the republic was inaugurated in Karachay-Cherkessia 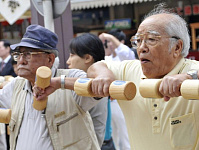 In Japan, the maximum number of elderly people has been beaten

Kazakhstani authorities organize a "parade at home" for veterans

Russian ships will take part in the naval parade in Thailand