The Memorandum of Understanding between the Far Eastern Federal University (FEFU) and the Chinese-Russian innovation park "Silk Road" (China, Shaanxi Province) was signed on the sidelines of the Eastern Economic Forum.

Its result will be the creation of a Russian-Chinese Center for Technological and Investment Cooperation on the basis of FEFU.
The Center will develop joint scientific and technological projects between the Russian Federation and the People's Republic of China. The agreement was signed by Acting Vice-Rector for International Relations of FEFU Evgeny Vlasov and Director of the Innovation Park So Rui. The parties also discussed the prospects for the development of scientific, technological and investment potential of Russia and China.

"For FEFU, partnership in such a format is being implemented for the first time. The development of the scientific and technological potential of Russia, as a step towards technological sovereignty, in the context of the implementation of the policy of the "Eastern Vector" imposes a high responsibility on the university. FEFU is one of the leaders of Oriental studies in Russia, has a rich experience of interaction with the educational and scientific circles of China.  As a result of the creation of the Center, FEFU will become a unique platform for combining education, science and production in the field of high technologies. In the future, this will allow Russian and foreign FEFU students, as well as students from other Russian universities, to take advantage of the Center's opportunities and get involved in the development of Russia's scientific and technological potential, using the achievements of Chinese partners," Evgeny Vlasov said. Far Eastern Federal University is actively working to strengthen international relations, strengthening the position of the flagship of Russian education in the Asia-Pacific region.

FEFU's international partner network includes more than 300 educational institutions. Half of them are located in the Asia-Pacific region. FEFU has representative offices in Japan, the People's Republic of China, the Socialist Republic of Vietnam, India, and a branch of the university has been operating in Japan on the island of Hokkaido for more than 20 years. 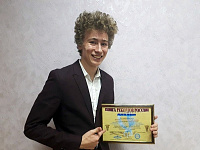 A student from Yekaterinburg set a mathematical record

Saudi girls train to be truckers

Married couples in China will be allowed to have three children

China will build the northernmost bridge near Krasnoyarsk

The Paralympic Flame arrives in Tokyo