Russia and China have launched their media cooperation

Russia and China have launched a project to exchange video products between leading media.

The ceremony of the official launch of the Russian-Chinese project on the exchange of video products between the leading media of the two countries took place on Friday at the Russian Embassy in Beijing, RIA Novosti correspondent reports.
"Today we have launched a unique project that has become the result of close and fruitful cooperation between Russian and Chinese mass media. In the modern information age, it is extremely important to maintain such a high level of interaction, constantly look for new ways of delivering content to the audience in terms of content and technology, increase innovation and creativity of work, look for non-standard solutions, change and learn," Russian Ambassador to China Andrey Denisov said at the ceremony.
The diplomat stressed that "being well aware of their huge role in the development of bilateral relations, the media of Russia and China continuously strengthen mutually beneficial partnership, promote comprehensive and diverse exchanges, successfully complement each other and fully realize their competitive advantages in the international arena."
Director General of CGTN TV channel, which is part of the media corporation of China, Fan Yun, in turn, noted that "video is a living medium with which you can capture the changes of time, witness the development of countries and facilitate the exchange of experience between civilizations."  "Within the framework of the current CGTN project, working closely with VGTRK, MIA Rossiya Segodnya, Rossiyskaya Gazeta, the Red Line TV channel, the Greater Asia TV channel and many other leading media, strives to fully show the real China to the Russian-speaking audience…
CGTN TV channels and multimedia platforms in different languages are also ready to help Russian colleagues in distributing their high-quality video products dedicated to Russian history and culture," Fan Yun said.
He added that "against the background of serious changes taking place in the international arena, practical cooperation between Russia and China is steadily developing, and the dynamics of the development of bilateral relations remains good."
"Taking advantage of the launch of the Russian-Chinese video exchange project, CGTN TV channel intends to continuously deepen contacts and interaction with the Russian media. I am deeply convinced that these videos will play the role of "windows" and "bridges" between cultures, will contribute to deepening mutual understanding between our peoples and strengthening the traditional friendship between Russia and China," he concluded.

On the first day of the May Day holidays, 18.3 million passengers bought a train ticket 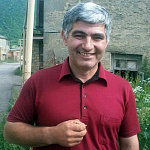 A new hero of Russia has appeared in Dagestan. Posthumously.

Aeroflot to relaunch flights to Colombo in April