Events for children and solemn ceremonies are held all over the country.

99 years ago, on April 23, 1920, the State Parliament, the Grand National Assembly of Turkey, was officially formed. In accordance with the law of 1921, this date became the first national holiday of the Republic, which was called the "National Holiday of April 23".

< tbody> Sovereignty Day has been celebrated since the formation of the Republic of Turkey by Mustafa Kemal Ataturk and, however, in 1979 the holiday was renamed "International Children's Day".

In its current form, the holiday has been celebrated since 1981 after amendments were made to the "Law on Holidays". Since then, it has been called the "National Sovereignty and Children's Day".

Traditionally, events for children and solemn ceremonies are held all over Turkey on April 23rd. Also, this date is considered an official holiday.

Telecom operator from Japan will use American satellites 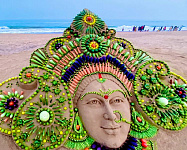 convoy with building materials arrived in Nagorno-Karabakh from Russia

A new WHO structure will appear in Japan

Russia is increasing its icebreaking fleet

Russia and Pakistan will hold annual military exercises in the Kuban