Narendra Modi released the first three cheetahs into the aviaries

Narendra Modi noted that cheetahs were declared extinct in the country in 1952 and no significant efforts have been made for decades to restore the population.

Indian Prime Minister Narendra Modi announced on Saturday the launch of a comprehensive operation to return cheetahs to India, which were destroyed in this country 70 years ago. At a ceremony in the Kuno Nature Reserve in central India, which was broadcast live by local TV channels, the prime minister released three cheetahs into specially prepared aviaries.

In total, eight such predators were delivered to India from Namibia — five females and three males. Other cats will also be released into aviaries for primary adaptation. Then they will be released to the territory of the reserve to begin the restoration of the population on the Hindustan peninsula. The start of the operation was timed to coincide with the birthday of Prime Minister Narendra Modi, who turned 72 on Saturday.

"Decades ago, the age-old link of biodiversity faded away, but today we have a chance to restore it. Today the cheetah has returned to the land of India. And I would say that along with these cheetahs, India's nature—loving consciousness has also appeared in full force," Narendra Modi said at the ceremony.

He added that cheetahs were declared extinct in the country in 1952 and no significant efforts have been made for decades to restore the population. But in the year of the 75th anniversary of independence, "the country took up the revival of cheetahs with new energy," the prime minister noted (India gained independence from Great Britain in 1947 - approx. TASS).

The cheetah is to become the sixth major predator of the feline family living in India, after the Bengal tiger, Asian lion (preserved in a reserve in Gujarat), Indian leopard, snow leopard and smoky leopard (a small population is preserved in the mountainous regions of the northeast of the country).

African cheetahs in Hindustan Previously, the Asian subspecies of the cheetah was found throughout the Middle East and in Hindustan.

However, there are currently only a few individuals left in Iran. In India, these animals were recognized as completely extinct in 1952 — exactly 70 years ago.

To restore the population of the Asian cheetah today in India was considered impossible. It was decided to launch African cheetahs in the reserve, which have certain differences from Asian ones.

A special operation was carried out to deliver the predators. The country's Air Force plane with cheetahs on board arrived from Africa at Maharajpur Air Base in Gwalior at about 8 am (05:30 GMT). Then military helicopters took the animals to the Kuno Nature Reserve in Madhya Pradesh.

According to the management of the reserve, radio collars are installed on all cheetahs to monitor their movement via satellite. A special group will monitor each cheetah 24 hours a day.

At the same time, experts note that the reintroduction of these predators into the wild will take time, so it will be possible to finally understand whether or not cheetahs have been returned to Hindustan only in at least 15 years. This is the average amount of time it takes for a species to confidently adapt and become part of a new landscape for itself.
India Prime Minister Narendra Modi cheetah TASS
|
Facebook
|
Twitter
|
VKontakte
|
Odnoklassniki 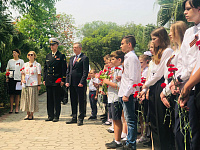 The calculation of the subsistence minimum may be changed in Georgia