Vaccination of the population from coronavirus has begun in Tajikistan.

Gradual vaccination of the population of Tajikistan against coronavirus infection began on Monday. The corresponding decree was signed by the President of the Republic Emomali Rahmon, the text was published by the press service of the head of state.

“Conduct from March 22, 2021, phased immunization against the infectious disease COVID-19 in the Republic of Tajikistan among vulnerable groups of the population”, says  resolution.

The Ministry of Health and Social Protection of the Population of Tajikistan needs to develop and approve an action plan for immunization, notifying local authorities and medical institutions of cities and regions of the republic. The ruling states that the vaccine must be delivered in a timely manner "with respect to the conditions of the cold chain."

Ministries and departments, local authorities, the media and other organizations need to create favorable conditions for vaccinating "employees in their industries who belong to vulnerable groups ". The Television and Radio Committee is tasked with recording and broadcasting programs on immunization, and the Committee on Religion, Ordering Traditions, Celebrations and Rites is tasked with promoting the importance of vaccination among the population.

Earlier, the Ministry of Health reported that within the framework of the COVAX mechanism (Kovax), Tajikistan received the first batch of AstraZeneca vaccine produced in India, in the amount of 192 thousand ;doz. It was noted that 20% of the population or 1.8 million people will be vaccinated with the vaccine, primarily medical workers, people over 60 and those with non-communicable chronic diseases.

At the moment, the situation with the coronavirus in Tajikistan is stable—since January 2021, no new cases of infection have been detected. At the same time, the authorities of the republic insist on  compliance with precautionary measures - in public places, passenger terminals, in transport, in shops and medical institutions, a mask regime is mandatory. The first 15 infected people were detected in the country on April 30 last year. According to the Ministry of Health and Social Protection of the population of the republic, the total number of people infected with coronavirus was 13,308 (0.1% of the population of the republic), 90 people died from complications caused by the infection.

Ilham Aliyev appreciated the work of Russian peacekeepers in Karabakh 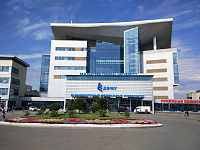 Leading Asian centers are interested in cooperation with FEFU

Since the beginning of the year, more than 14 million tourists have visited the resorts of the Kuban

Car sharing will come to Astana and Shymkent