The government of Kuwait adopted a decree on Monday, according to which foreign citizens who have been vaccinated against coronavirus with a drug approved in the country will be able to cross the land and sea borders of the emirate starting from 1 August this year.

“The government has decided to open land and sea borders from August 1 for those vaccinated against coronavirus with a drug approved in Kuwait   - the news agency of the emirate KUNA quotes the text of the decision of the Cabinet.

In addition, according to the government decree, “since 29 June, citizens of Kuwait, as well as their from  coronavirus with at least one dose of the drug, they will again be able to visit the country, crossing its marine or land borders.

The biggest Hanuman is coming to Bangalore

In Russia, the resumption of the normal educational process continues

An agricultural village will appear in the mountains of North Ossetia 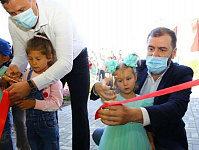 The Tashkent week of the International program "MediAsia" has ended