Krasnoyarsk strongman dragged an airliner on himself

Siberian strongman Innokenty Veselov carried 65 tons on his shoulders. The record distance is 17 meters 6 centimeters. The athlete moved the Boeing 737-800 in just 45 seconds.

“I wanted to make a spectacular show, a spectacular record,” said Innokenty Veselov, Russian champion in power extreme.  -  The plane fits into this more. It is like a healthy, heavy projectile. Trained how? You put your own car on the handbrake and roll it on the handbrake. The more clicks, the harder. So I trained. Therefore, if you tow your car, then any other projectile will be on your shoulder.”

The most difficult thing is to get the liner off the ground, the athlete says. Innokenty dragged a difficult projectile in climbing shoes and a special vest. It was to him that the cables were attached, for which the athlete pulled the plane. This test will definitely enter the Russian book of records.

“It seems to us that it was the heaviest aircraft,” said Vasily Grishchenko, President of the Power Extreme Federation of Russia. - Therefore, now we will simply conduct statistics and, maybe, a little later, we will recognize this as a world record. Accordingly, we will have the right to submit it to the Guinness Book of Records, to assign a Guinness record.”

The Krasnoyarsk strongman is not going to stop at Boeing. The next target is even harder: in the next few months, the record holder plans to budge the Airbus.

Russian "Kovivak" may be approved in South Korea

Electronic customs will appear in Yekaterinburg 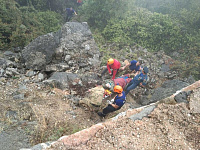 In Crimea, the Russian Guards were the first to come to the aid of victims of an accident

The largest vaccine warehouse in the region opens in Tashkent

On the eve of New Year's Eve, a general curfew was introduced in Turkey