This year, 26 warships and boats, 15 support vessels, more than 900 personnel, as well as four aircraft will take part in the parade.

The dress rehearsal of the naval parade dedicated to the Day of the Russian Navy takes place on Friday in Dagestan Kaspiysk. This year, ships of the Azerbaijani and Iranian navies will take part in the celebrations for the first time, a TASS correspondent reports.

"The main highlight of this year will be the participation of the ships of the navies of Azerbaijan and Iran, which for the first time in many years came to us with a friendly visit as part of the joint celebration of the Navy Day. They are taking part in the celebrations for the first time," the first rank captain, Deputy commander of the Caspian Flotilla for military and political work, told reporters Sergey Rakauskas.

According to him, this year 26 warships and boats, 15 support vessels, more than 900 personnel, as well as 4 aircraft will take part in the parade. During the parade, according to the press service of the flotilla, two missile ships "Tatarstan" and "Dagestan", small artillery ships "Makhachkala", "Astrakhan", small rocket ships "Grad Sviyazhsk" "Uglich" and "Stupinets" will be presented. The hydrographic boat "Nikolay Ivashintsov", the base minesweepers "Magomed Hajiyev", "German Ugryumov" and the anti-sabotage boat "Yunarmeets Dagestan" will also take part in the parade.

As previously reported in the press service of the Southern Military District, a dynamic demonstration of the flotilla's capabilities will take place at sea and on the shore opposite the Moscow cinema on July 31 in Kaspiysk. The servicemen will demonstrate about 10 practical jokes of military operations: suppression of violation of the state border, making a passage in a sea minefield, naval combat with ships of a conditional enemy. In addition, they will show a missile strike on important objects of a conditional enemy, assistance to a ship in distress, conducting anti-amphibious defense, landing a tactical marine landing, a battle for landing on the shore, as well as fountains on the water with water supply to the carriage installations of rescue and raid tugs. Residents and guests of the city will be able to visit the static exhibition of weapons and military equipment of the Caspian Flotilla. In the final part of the military sports festival, a festive salute will be held.
Russia Azerbaijan Iran Kaspiysk parade Navy TASS
|
Facebook
|
Twitter
|
VKontakte
|
Odnoklassniki 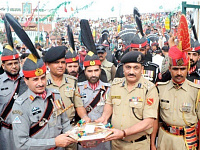 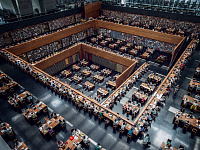