The leader of the DPRK, Kim Jong-un, inspected the plant for the production of "one of the" important types of military equipment" of the People's Republic. This was reported by the Pyongyang Times on Friday.

During his visit to the industrial facility, the leader of the people's republic gave a positive assessment of the   party," and innovations at the enterprise. Kim Jong-un added that the plant "plays an important role in the modernization of the country's armed forces and the implementation of the strategy to strengthen the national defense." The leader of the DPRK was accompanied, among other things, by the Deputy Head of the Propaganda and Agitation Department of the Central Committee of the Workers' Party of Korea (WPK) Kim Yo-Jong, a member of the Presidium of the Politburo of the Central Committee of the WPK Cho Yon Won.

The General Secretary of the WPK Central Committee called on the workers, engineers and other employees of the military plant to intensive work in order to fulfill the provisions of the state policy in the field of the defense industry. According to the newspaper, the labor collective responded to the call of the leader of the country and the party, which ensure the country's security and its right to self-defense against external forces.

On the Day of Knowledge, 30,000 National Guardsmen will stand guard over security

The seventh-grader sent a musical gift to the Russian Guards

In Naryan-Mar, the National Guard and the police ensured the safety of laying flowers in honor of the feat of reindeer herders

The number of vaccinated in China has exceeded one billion

Uzbekistan and Kazakhstan connected by another bus route 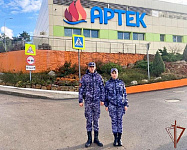 In the Syrian Neyrab, the restaurant was converted into a first-aid post for patients with coronavirus

A male Asian leopard was spotted in Dagestan

Lebanon unveils controversial slogan to promote travel to the country