About 6 million components of the Russian Sputnik V have been produced in Kazakhstan.

Kazakhstan has launched the production of the Russian vaccine against covid "Sputnik V" and has already produced more than six million components of the drug. This was stated by the President of the Russian Federation Vladimir Putin at a press conference on the results of negotiations with Kazakh counterpart Kassym-Jomart Tokayev.

He noted that the two countries are actively developing cooperation in pharmaceutics and medicine. In the most acute period of the pandemic, Russia came to the aid of the fraternal republic, "sending an impressive landing of medical personnel and humanitarian supplies," the head of state added.

“The production of the Russian vaccine Sputnik V has been reliably established at the facilities of the Karaganda pharmaceutical complex. In total, more than 6 million components of the first and second doses of this drug have already been produced,  - said Vladimir Putin.

In addition, he continued, deliveries of the Sputnik Light vaccine to Kazakhstan have begun, which can be used, among other things, as a booster. 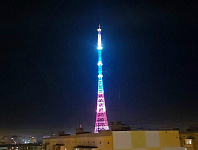 In honor of the Constitution Day, the Yakut TV tower shone with the colors of the tricolor

Retro cars were shown in Novosibirsk

A special environmental campaign will be held on International Earth Day

Cooperation between the archives of Russia and Kazakhstan will become stronger