On June 12, 1990, the Declaration on State Sovereignty of the Russian Soviet Federative Socialist Republic was adopted. Festive events on the occasion of the Day of Russia gathered over 7 million people across the country.

Russian President Vladimir Putin congratulated the Russians on the holiday: “I am glad to congratulate all the citizens of our country on the Day of Russia. This holiday symbolizes a free, future-oriented Russia, marks the greatness of its centuries-old history, the victory and accomplishment of many generations of our ancestors,” the head of state said at the ceremony of presenting the State Prizes of the Russian Federation.
In his opinion, "today, our contemporaries affirm the strength and glory of the Fatherland with their work, achievements."

The President noted that " One of the most significant events and traditions for Russia is the awarding of the badges of the State Prize laureates. "This is a celebration in honor of the outstanding citizens of our country, the high recognition of their services to the Motherland," Vladimir Putin emphasized. 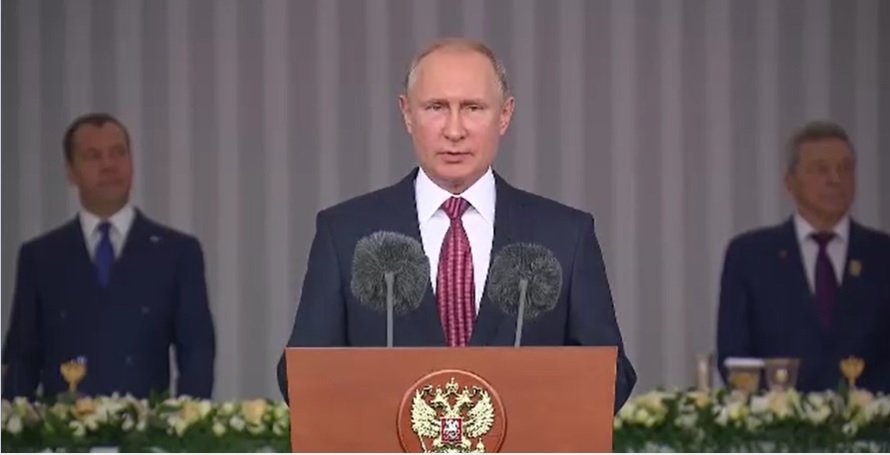 The head of Karachay-Cherkessia, Rashid Temrezov, held an impromptu lesson on Russian statehood for schoolchildren of the republic on Russia Day, The press service of the head and government of the KChR reported on Tuesday.

Temrezov gave students a tour of the main administrative building of the republic - the Government House, the guys also visited the office of the head of the KChR.


Photo from the site: www.riakchr.ru


< br> "During the conversation with representatives of the younger generation, the head of the republic paid much attention to the issues of the upcoming professional orientation and self-determination of schoolchildren. He told schoolchildren about the most demanded specialties today and the acute shortage of personnel in the field of working professions," the press service noted. 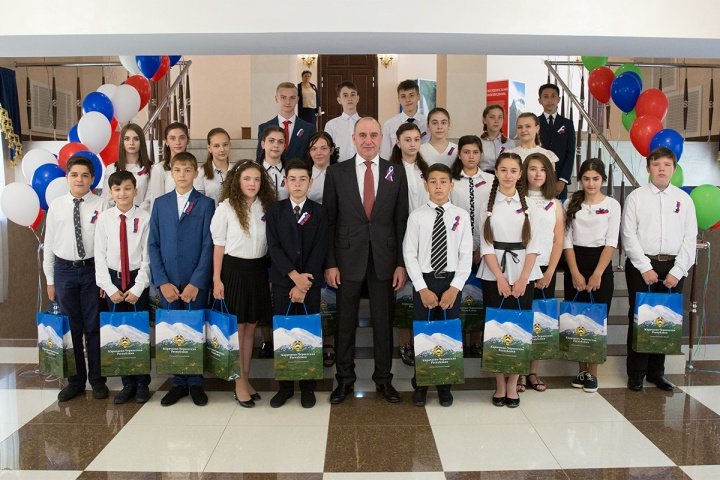 Photo from the site: www.riakchr.ru

Main festive events of the Day Russia in the Altai Territory this year took place in the mountains, on the territory of the special economic zone (SEZ) "Turquoise Katun". For the first time, an ethno-festival dedicated to the culture of various peoples and traditional crafts was held there. 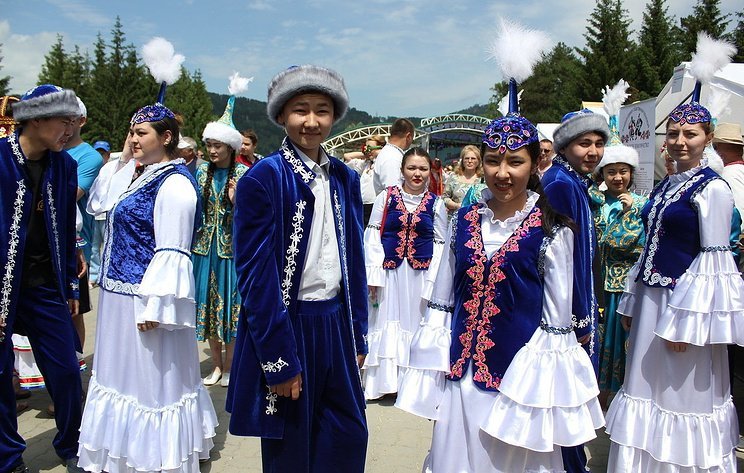 It brought together about 10 thousand guests who took part in master classes - from national dances before baking gingerbread.

700 artisans and artists took part in the festival. On the site around the man-made lake on the "Turquoise Katun", next to the stormy mountain river Katun and a pine forest, "streets" of bright tents appeared, in which mini-museums of national cultures, master classes, and exhibitions of works were organized. 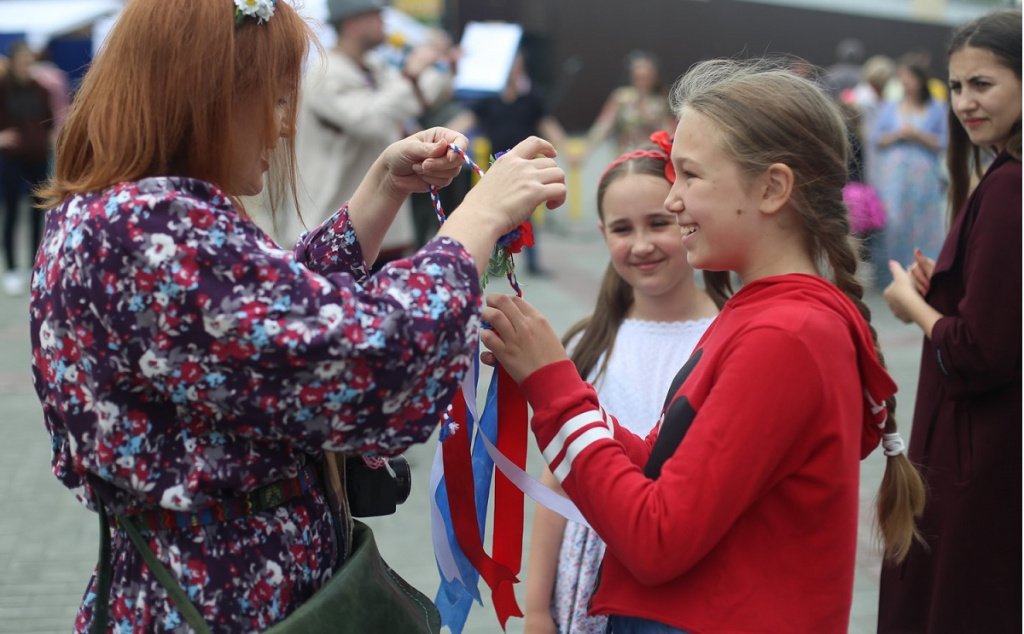 Photo from the site: www.amic.ru


Masters gathered from almost all over the country. 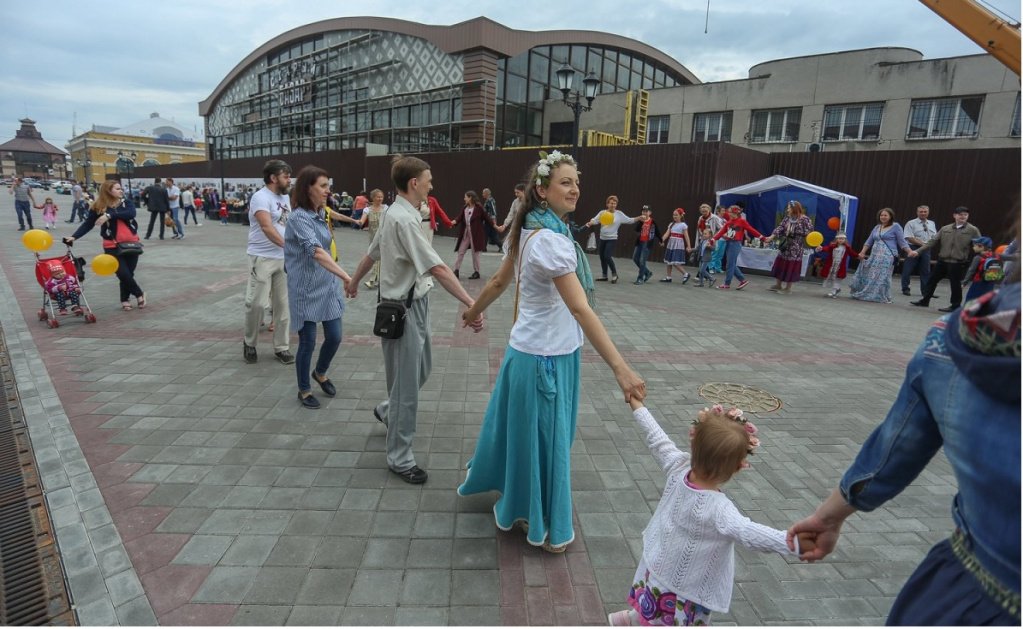 Photo from the site: www.amic.ru


Guests of the festival also got acquainted with the oh "Turquoise Katun", many visitors came from neighboring regions and were here for the first time. They combined entertainment on the site with an excursion to the bank of the Katun River and a tour of the Altai Mountains. 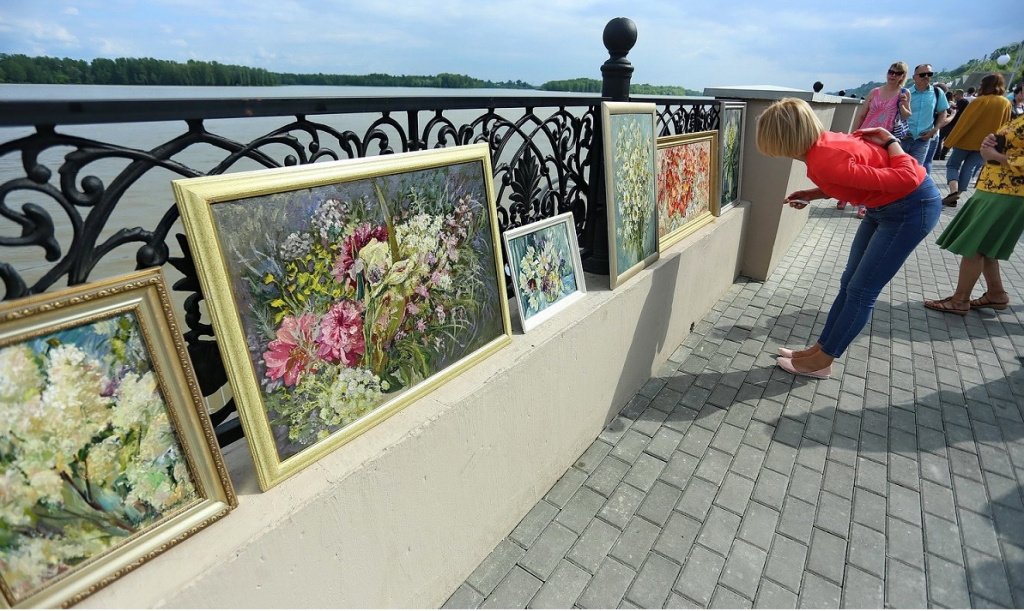 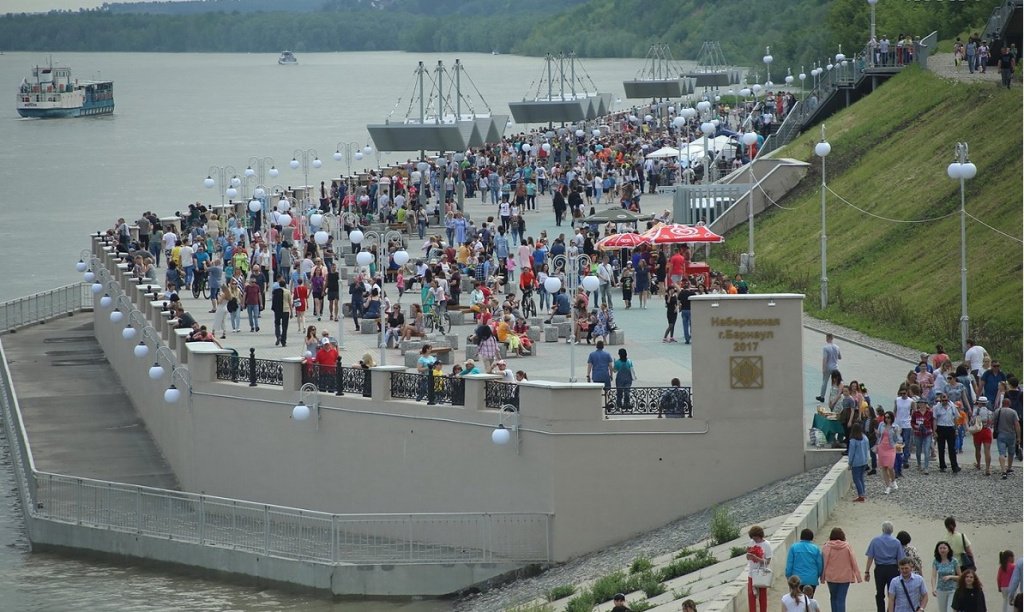 Photo from the site: www.amic. en

In Makhachkala, about 1.5 thousand people from different regions and cities of Dagestan took part in the Friendship Parade of the Peoples of Russia. The parade participants marched in a column from the central square of Makhachkala along Prospekt im. Rasul Gamzatov to the Russian Theater. M. Gorky. In front of the column, schoolchildren, university students, as well as representatives of youth public organizations carried the flag of the Russian Federation, which they unfurled before the start of the parade on the main square of Makhachkala. 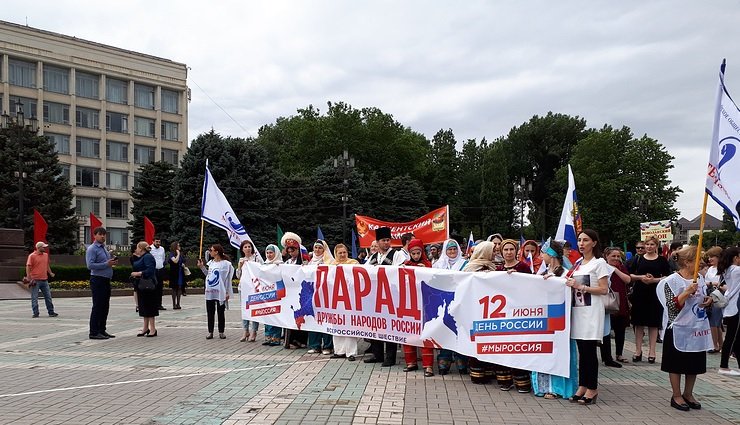 "The large-scale flag of the Russian Federation is 15 by 30 meters in size and has a total area of 450 square meters. meters, we deployed on the central square as part of the campaign "I am a Russian", dedicated to the celebration of the Day of Russia in Dagestan. About 100 young guys took part in it," Rashid Maksutov, director of the Republican Youth Center of the Ministry of Youth of Dagestan, told TASS.

Photo from the site: minmol.ru


Photo from the site : minmol.ru


More than 8,000 people took part in rallies and concerts dedicated to the Day of Russia, which took place in all large settlements of Ingushetia. The largest events were held in Nazran.

Representatives of various diasporas living on the territory of Ingushetia also participated in the events.

In addition to rallies and concerts in honor of the holiday, open days and book exhibitions were held in all museums and libraries of the republic. Concert programs will continue in the region until late in the evening.


Photo from the site: ingushetia.ru< /i>

In Vladikavkaz, in honor of the Day of Russia, the festival of the Ossetian song "Iron Zarag" was held, in which folk choirs, classical, pop-jazz and rock ensembles, vocal groups took part. The participants were representatives of all age categories, performing songs in the Ossetian language. The guests of the festival were artists from South Ossetia - the vocal and instrumental ensemble of the South Ossetian State University.

About 20,000 people took part in a festive rally dedicated to the Day of Russia in Grozny. During the solemn event on the central square of the city, 10 Chechen schoolchildren received passports.

After the rally on the square, a concert of creative groups of small peoples of the republic and Chechen pop stars began. 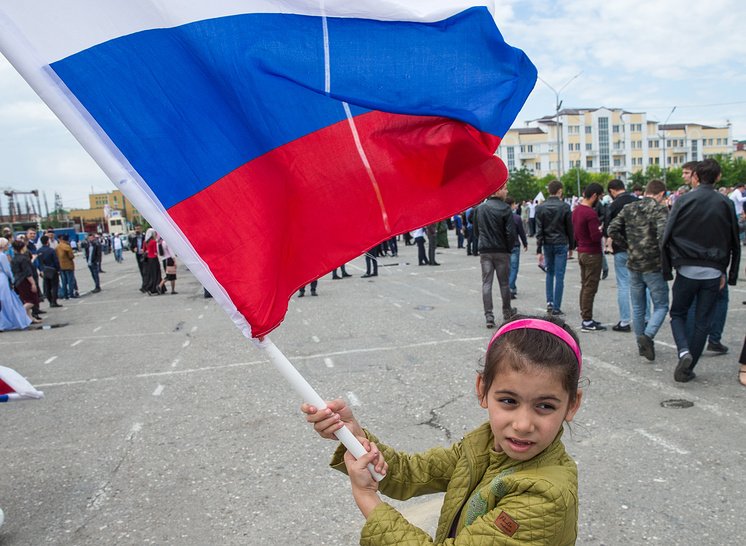 Folk festivals, exhibitions and meetings with schoolchildren on the occasion of the Day of Russia are held throughout the republic. 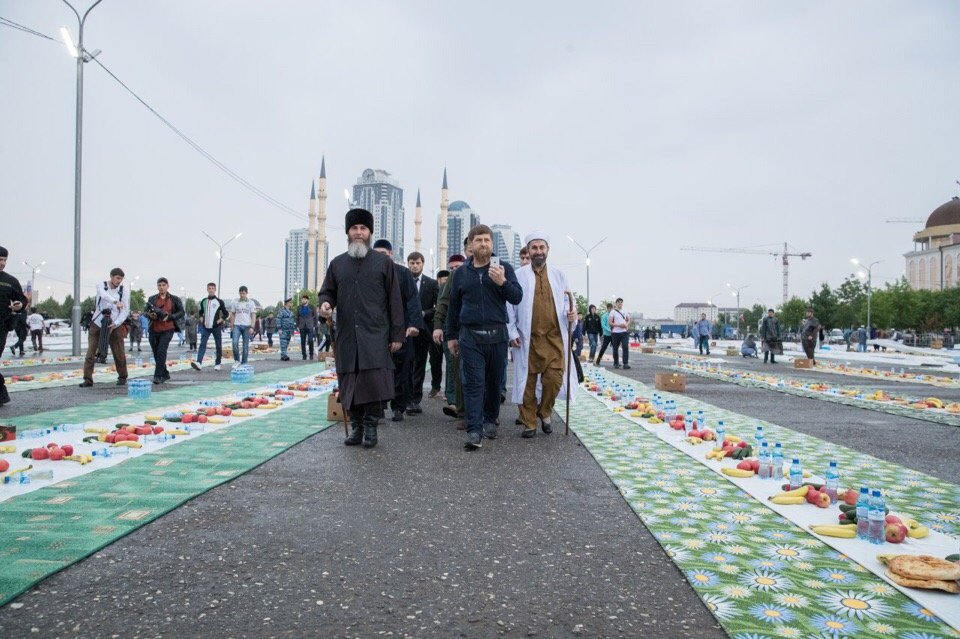 Procession in national costumes with a thirty-meter Russian flag, the TRP festival, a bike ride and flash mobs were held in Karachay-Cherkessia on the Day of Russia.

This year Cherkessk hosted the Peoples' Friendship Parade, which, according to the organizers, gathered 2.5 thousand people. The solemn procession passed from the central square of the city along Komsomolskaya Street to the park of culture and recreation "Green Island", where most of the festive events took place. It was led by elementary school students of Cherkessk with flags and balloons, followed by artists of the choreographic groups of the republic, who carried a 30-meter tricolor. 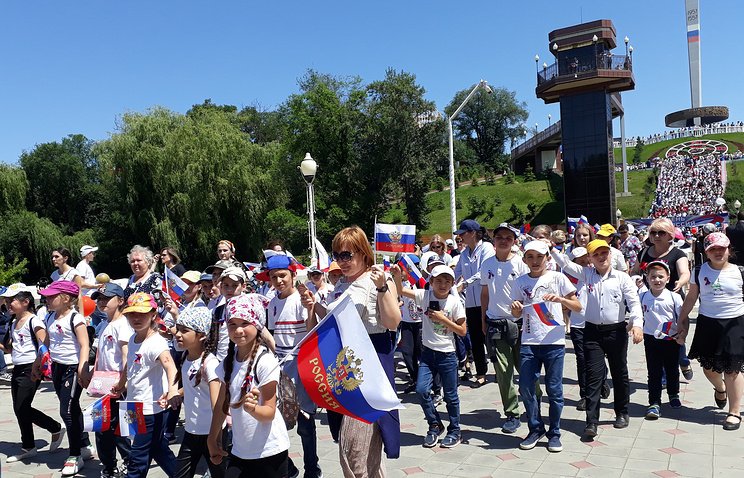 Residents of Siberia celebrate the Day of Russia with youth processions, national games and cuisine of different peoples, and also congratulate the country on the holiday with colorful graffiti and a dance battle. 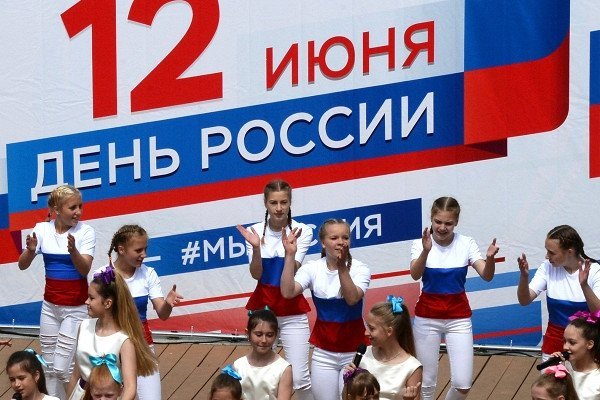 More than 8.5 thousand people participated in the Day of Russia Parade of Friendship of Peoples in Kabardino-Balkaria (KBR ) in Nalchik.


Having gathered on Lenin Avenue near the monument "Forever with Russia", the participants went towards the State Concert Hall (GKZ), the procession was led by children with a large unfurled flag of the Russian Federation in their hands. Together with representatives of 20 diasporas living on the territory of the republic, representatives of the legislative and executive authorities of the republic, public organizations, students, schoolchildren and volunteers marched.

The big colorful concert "The Wreath of Friendship", which lasted several hours on the square in front of the State Concert Hall, united representatives of all 100 nationalities living in the KBR. 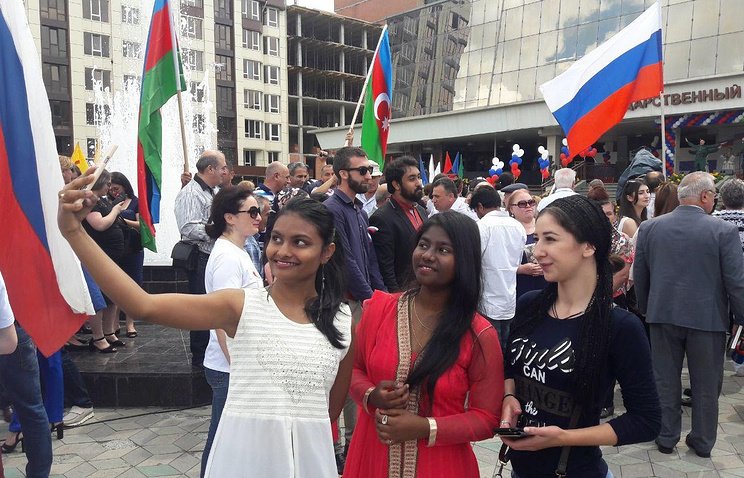 
Congratulations on the Day of Russia were published on the official page of the State of Israel on Twitter. 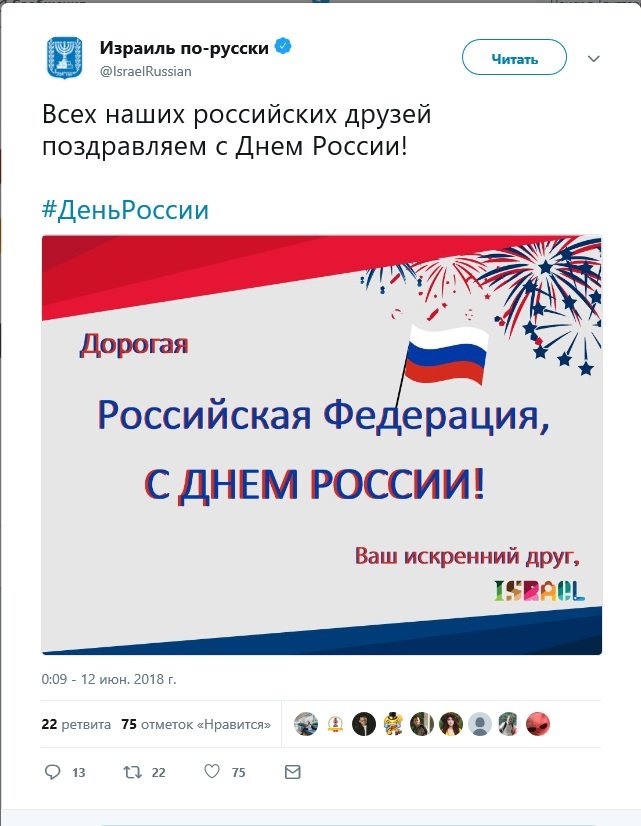 
Sultan of Brunei Hassanal Bolkiah and the embassy The Russian Federation in this country congratulated the Russians on the holiday.

The regions of the Ural Federal District (UrFD) celebrated the Day of Russia with a parade of friendship between peoples, sports games, as well as a paratrooper jump with the national flag.

Athletes-paratroopers, members of the unofficial social movement Putin Team congratulated the residents of the Sverdlovsk region with an aerial performance. As the organizers of the performance told TASS, two paratroopers made a synchronized jump from a height of 1,500 meters, opening the national flag and a canvas with the inscription Putin Team and the hashtag #Day of Russia in the sky. 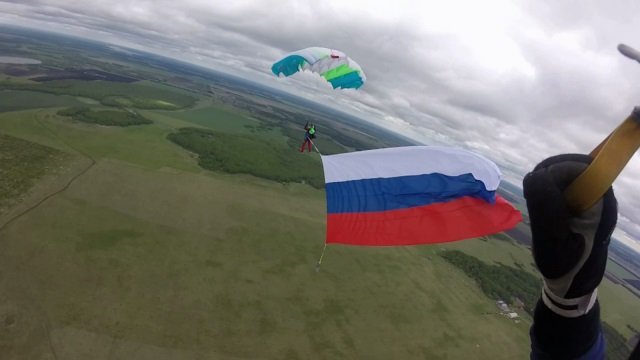 Photo from the site: www.kremlinrus.ru

The center of Stavropol has become a large sports ground, the main theme of the holiday was the upcoming 2018 FIFA World Cup. Students competed in knowledge of the rules of football, young athletes showed the skill of ball control, and residents of the city were congratulated by fellow countryman, member of the Russian national football team Ilya Kutepov. 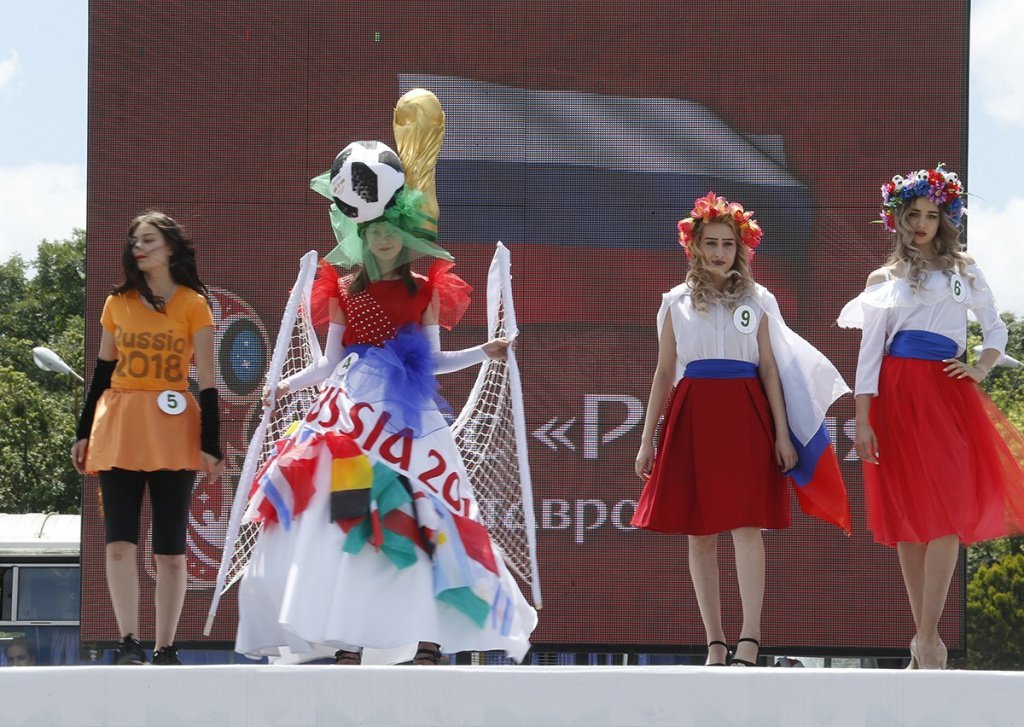 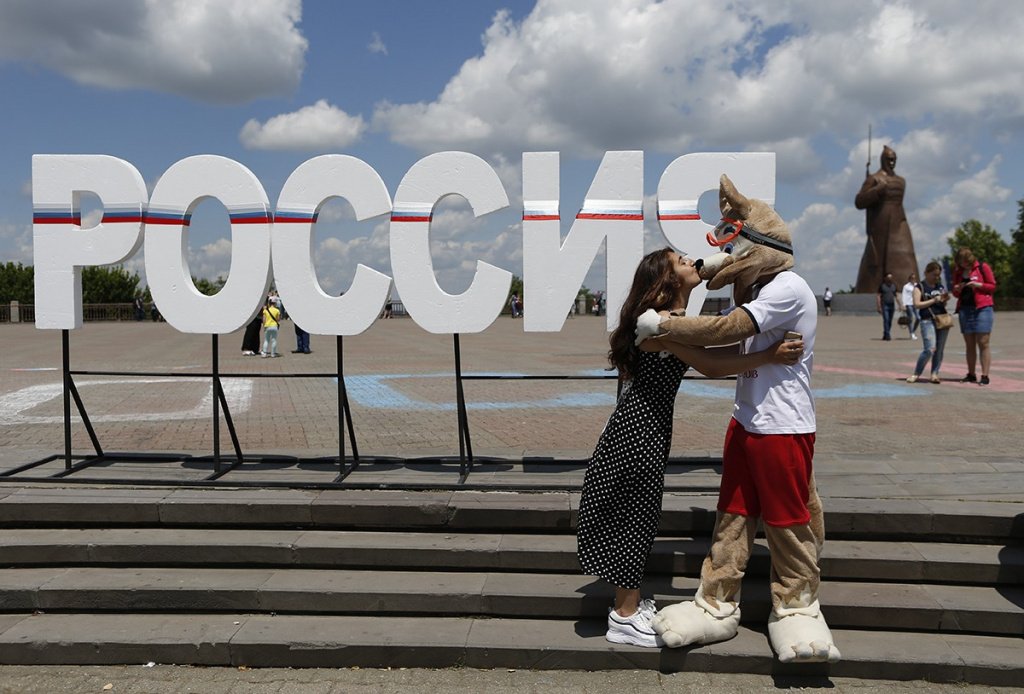 
Residents of the Amur Region on the Day of Russia became participants in numerous festive events. Many of them started the day with a mass exercise, took part in a photocross, attended concerts and master classes. 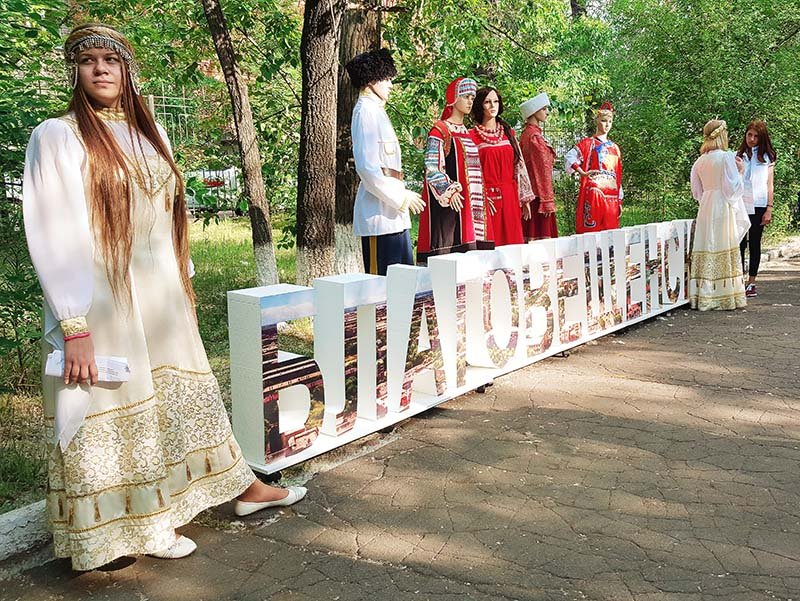 Armenian President Armen Sarkissian sent a congratulatory letter to his Russian counterpart Vladimir Putin on the occasion of Russia Day. "Dear Vladimir Vladimirovich, please accept my warm congratulations on the occasion of the national holiday - the Day of Russia. This important day laid the foundation for state building and socio-economic development, systemic transformations in the fields of education, science and culture, which the fraternal Russian people are rightfully proud of," the letter says. 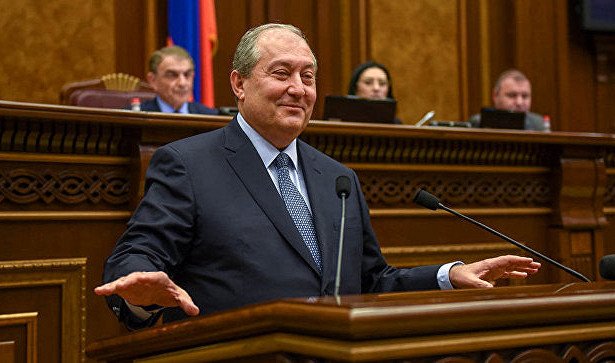 President of Abkhazia Raul Khadjimba congratulated Vladimir Putin on the Day of Russia.

"This day is truly considered a starting point in the history of the new Russian statehood, which has gone through a difficult and heroic path of its formation and development. The people of Russia are rightfully proud of their Motherland and look to the future with confidence," the congratulation says.


Photo: Press Service of the President

The residents of Buryatia celebrated a double holiday on Tuesday: the Day of Russia and the 95th anniversary of the Republic. we saw colorful fireworks. 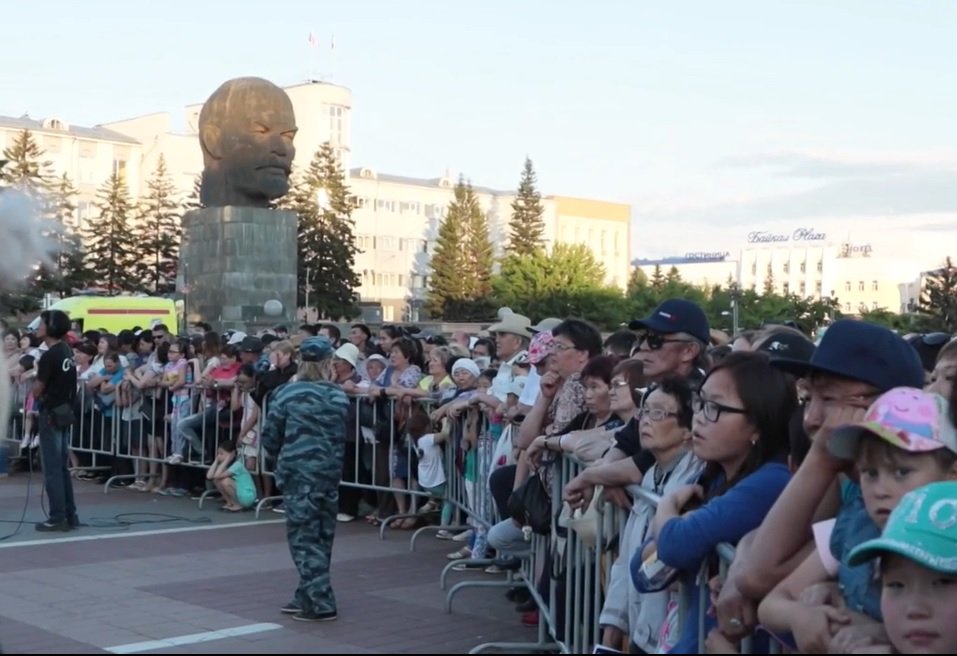 Residents of Anadyr during the celebration of the Day of Russia carried a 30-meter Russian flag along the main street of the capital of Chukotka.< br
> 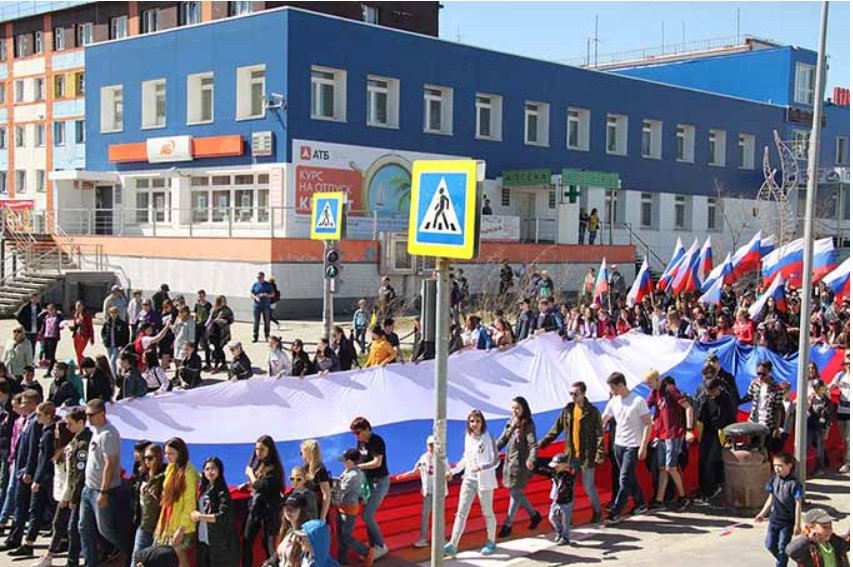 Photo from the site: the capital of Chukotka.rf


The Russian tricolor with an area of about 45 square meters was drawn by children and teenagers on Tuesday, the Day of Russia, on the territory of the Victory Park in Chita.

About two hours, despite the June heat, children, teenagers and their parents drew with crayons on the pavement a huge flag of Russia. It turned out to be about three meters wide and about 15 meters long.

More than 1.5 thousand people, representatives of different nationalities living in the Khabarovsk Territory, united in a round dance of friendship, which was organized in Khabarovsk on the Day of Russia. 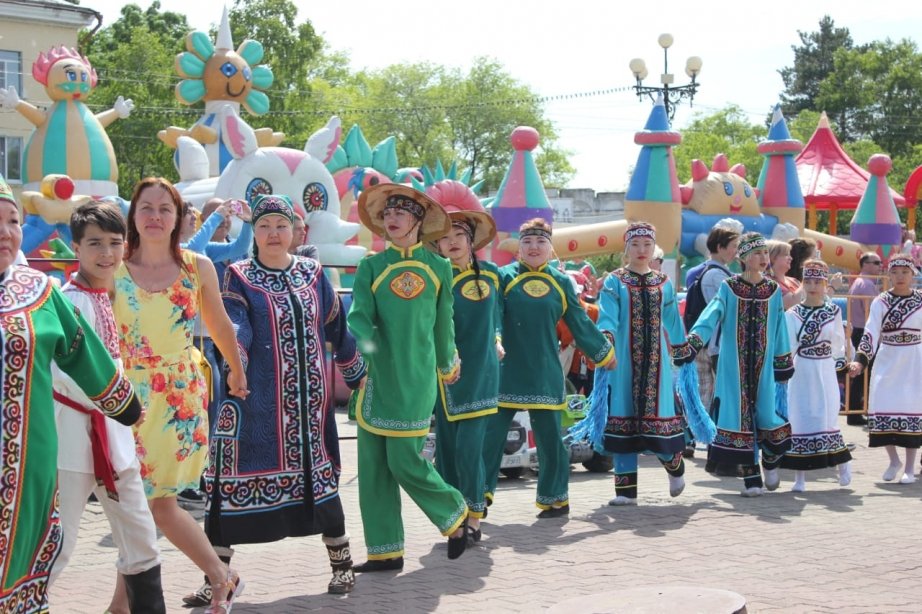 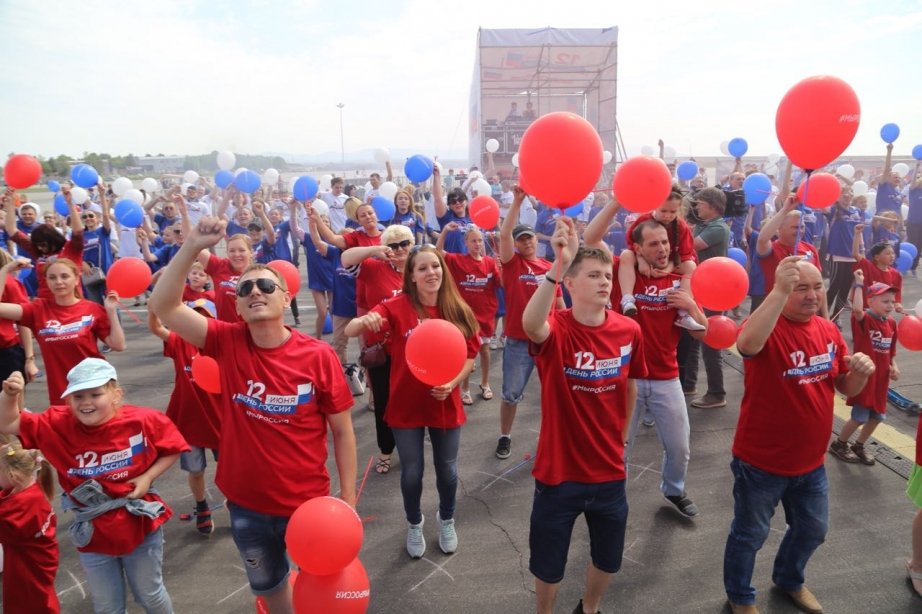 Photo from the site: khabkrai.ru

Sailing regatta "Sails of Russia" for cruising yachts started in Vladivostok on June 12. There were 43 crews at the start in four scoring groups according to the size of the yachts. The Sails of Russia race for cruising yachts takes place annually on June 12 in different cities of the country where there is open water and sailing. This year Vladivostok participates in it for the ninth time. It is also held in Khabarovsk, St. Petersburg, Pskov, Novosibirsk, Krasnodar Territory and other regions. 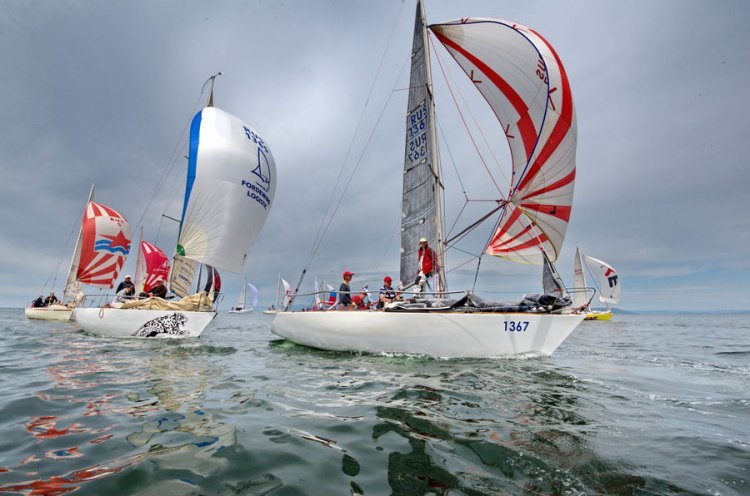 Photo from the site: sportprimorsky.ru


As already Greater Asia reported , one of the first to send congratulations to Russian President Vladimir Putin The leader of the DPRK.

Xi Jinping on the support of the people by the party, 82 routes to Europe, rescue in the mountains, exhibition of smart cars — see "Chinese Panorama" -262

China calls for a political solution to the Syrian crisis

Sputnik Light is registered in Kazakhstan

New administrative center of Akhal velayat to be built by 2022

The height of the giant mountain was measured again