A direct flight between Kyrgyzstan and Saudi Arabia has been opened.

The Kyrgyz airline has launched a direct flight between the republic and Saudi Arabia. This was announced on Monday by the press service of Manas International Airport, which includes all major air harbors in Kyrgyzstan.

“The first charter flight from Bishkek to Jeddah, operated by the national airline Air Manas, which became the first designated operator of Kyrgyzstan in  Kingdom of Saudi Arabia and will operate flights on Bishkek -Jeddah-Bishkek route once a week  - the message says.

It is planned that from the end of February this year, the number of flights from Kyrgyzstan to Saudi Arabia will be increased to four.

“The opening of a direct flight from Bishkek to Jeddah will help strengthen relations between the two countries, increase [the flow] of tourists, and will also enable our pilgrims to save money and  time. It is also planned to open flights from other cities of Saudi Arabia, - quotes the press service of the Ambassador of Kyrgyzstan to Saudi Arabia Ulukbek Maripov.

Residents of Japan would like to accelerate the pace of vaccination

Tokyo Olympics pedestals to be donated to local schools

A network of IT camps is being created in Ugra

The exhibition "The Power of Traditions: the Peoples of the Russian Federation" opened in Makhachkala 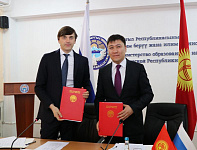 Birch bark certificates are being taken to Baikonur