The Japanese authorities are considering the option of completely abolishing the state of emergency.

The Japanese government, led by Prime Minister Yoshihide Suga, has begun considering the possibility of completely lifting the state of emergency imposed due to the coronavirus pandemic and continuing to operate in the capital region, where about 36 million people live. The Nikkei business newspaper reported this on Wednesday.

Now the state of emergency is in effect in Tokyo and the adjacent prefectures of Kanagawa, Saitama and Chiba until at least March 21. It is noted that the government intends to make a final decision on this issue on March 18, after hearing the opinions of experts.

Kazakh students will be able to get education in Russia

Kazakhstan plans to equate electronic documents with paper ones 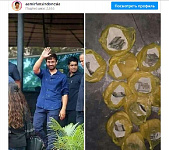 Bollywood actor distributes flour to the poor with a 'surprise'

Foreigners leaving Indonesia due to COVID-19