In Japan, they begin to develop rules for the use of flying cars.

The Japanese government has begun to develop rules and regulations that will regulate the movement of flying cars. They are expected to be put into practical use in the country for the first time in 2025 at the Osaka World Expo, Japan's leading business newspaper Nikkei reported on Friday. participation of representatives of the government, local authorities and private business, including the country's largest automotive corporation Toyota Motor ("Toyota"). The widespread use of flying cars in major cities in Japan is planned to begin in the 2030s.

The working group is expected to discuss, in particular, the procedure for equipping sites for takeoffs and landings of cars, the height of their movement, the rules of passenger behavior, and also the legal status of such machines, which will be generally equated to aircraft. At the World Expo in Osaka, it is planned to present flying cars of various models, including unmanned vehicles.

New monument to General Ivan Panfilov to be erected in Bishkek 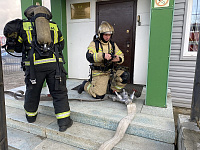 The National Guard, the Ministry of Emergency Situations and volunteers took part in fire-tactical exercises

A new fire broke out in Beirut, but the situation is already under control

All unemployed to be employed in Azerbaijan