Israel and UAE agree on mutual recognition of vaccination passports

The agreement provides for the free movement of citizens between the two countries without self-isolation and bureaucracy.

Israel and the United Arab Emirates (UAE) signed an agreement on Sunday for the mutual recognition of vaccination certificates and the movement of vaccinated citizens between the two countries without the need for quarantine. Minister of Health Nitzan Horowitz announced this on Twitter.

“I signed this morning with the Minister of Health of the United Arab Emirates an agreement on a “green corridor” between countries, which provides for the mutual recognition of vaccination certificates and free movement of citizens between the two countries without self-isolation and bureaucracy,” the head of the Israeli Ministry of Health wrote.

On September 15, 2020, in Washington, the Israeli side, with the active mediation of the United States, signed the Abraham Accords, documents on the normalization of relations with the UAE and Bahrain. Then, Sudan and Morocco announced a similar step against Israel. Before the conclusion of peace with the UAE and Bahrain, among the Arab countries, only Egypt and Jordan maintained diplomatic relations with the Jewish state.

On November 22 last year, the Israeli Cabinet ratified the visa-free agreement between the Jewish state and the UAE from February 2021. However, then the abolition of visas was postponed to mid-summer due to the high rate of spread of the coronavirus.
UAE Israel Ministry of Health vaccination passports coronavirus COVID-19 TASS
|
Facebook
|
Twitter
|
VKontakte
|
Odnoklassniki

Eurasia Global Youth Forum will be held in Russia

new approach to healthy nutrition for children in Uzbekistan 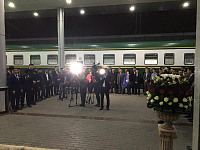