HETERO intends to produce up to 7 million doses of Sputnik V vaccine per month in India.

One of the largest pharmaceutical companies in India, HETERO Biopharma (Hetero Biopharma), intends to start producing at least seven million doses of the Russian Sputnik V vaccine in India in three months. He announced this on Saturday in an interview with the correspondent. TASS marketing director of this company Murali Krishna Reddy Bhimireddy.

“At the moment we expect that in three months we will reach a high production capacity. Initially, we will start producing 2.5 million doses of the vaccine per month. Then we will increase the output to seven million doses per month,” the source said. Production will begin "soon," he assured.

The marketing director of the company noted that an agreement has been signed with the Russian Direct Investment Fund (RDIF), which oversees this project, to produce a vaccine for other countries as well. “So we will work both for the world market and for ourselves,” he said.

Murali Krishna Reddy Bhimireddi considered it premature to talk about the cost of this drug in India and on the world market. market. “We are not commenting on this yet,” he said.

On April 12, the Comptroller General of Medicines of India approved the use of Sputnik V in the country. Vaccinations in India are currently being made with Covishield (Covishild) vaccines, developed by the British-Swedish company AstraZeneca (AstraZeneca) and Oxford University, and Covaxin (Covaxin) from the Indian Bharat Biotech (Bharat Biotech).
< br> HETERO is one of the largest Indian companies that will produce the Russian drug. As the head of the RDIF, Kirill Dmitriev, said earlier, the fund has agreements with more than five Indian companies that will produce Sputnik V.

Docked Russian-Chinese bridge across the Amur

Beijing authorities will act according to the laws of war

From April 1, Uzbekistan will start vaccination of the population

Pattaya authorities to lift quarantine for vaccinated tourists from October

Japan to make it easier for men to take maternity leave 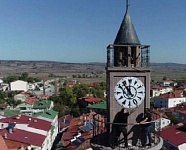 One of the oldest city clocks started in Turkey

Village in India renamed after Trump