The government of the Indian state of Maharashtra listened to the opinion of citizens, including sailors, and abandoned the previously announced idea to sink the decommissioned aircraft carrier Viraat in the Arabian Sea, turning it into a place for underwater excursions.

According to the Minister of Tourism of Maharashtra, Jaikumar Rawal, the widely publicized project had to be abandoned, since many Indians, including sailors, were negative about the idea of \u200b\u200bsinking a warship.

"This is an idea was not well received. Now we want the ship to be used for different purposes. We would like a part of it to be transformed into a naval museum, and the other premises could hold various tourist events", — the Minister spoke about new plans.

The minister noted that now it is planned to anchor the ship near the capital of Maharashtra, the metropolis of Mumbai. The corresponding proposal will be sent to the command of the Indian Navy, which disposes of the decommissioned ship.

It was previously announced that "Viraat" will be immersed in water to a depth of 50 m. He was supposed to repeat the fate of the American aircraft carrier "Oriskany" and serve for underwater excursions. "Oriskani" was sunk in 2006 off the coast of Florida and became a popular diving spot.

"Viraat" — "Giant" — was decommissioned from the  Indian Navy in March of this year, before it remained the oldest of operating aircraft carriers in the world. The ship served 27 years in the British Royal Navy under the name "Hermes", and then another 30 years under the flag of the Indian Navy. In 1982 "Hermes" was the flagship of the British naval group in the course of the war with Argentina over the Falkland Islands. India acquired the aircraft carrier in 1986 after a major upgrade.

On Victory Day, military columns in the historical uniform of the Red Army will march at the Khmeimim airbase 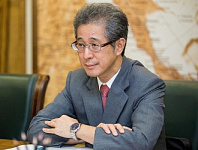 Consul General of Japan on Sakhalin loves borscht and dumplings

Qatar to introduce financial incentives for civil servants who marry