In Shanghai, there has been a trend towards a decrease in the incidence of coronavirus

Shanghai has seen a decrease in the number of detected cases of covid, but the lockdown continues.

In Shanghai, there has been a trend towards a gradual decrease in the daily rate of detected carriers of covid, the authorities intend to continue the policy of strict epidemic control and a complete lockdown of the metropolis. This is evidenced by the data published on Friday in the official account of the city administration in the Wechat messenger.

The incidence has significantly decreased in the areas of Pudong, Minhang, Songjiang, Qingpu, Putuo and Changning. Fluctuations in one direction or another are still observed in the Xuhui, Hongkou, Baoshan and Jiading regions. In Jing'an, Huangpu and Yangpu districts, the number of infections continues to rise. The authorities announced that they have succeeded in breaking the chains of transmission of the virus in Fengxian, Chongming and Jinshan districts, where the incidence is low and epidemic control measures have been significantly relaxed.

Since mid-March, the city authorities began to massively close residential complexes in various parts of the metropolis for testing for covid. By the end of last month, almost the entire population of Shanghai went through home quarantine lasting from two days to one week.

About two weeks ago, the Shanghai authorities decided to ease the control somewhat . We are talking about the establishment of restrictions in areas, depending on what status they have been assigned. All areas are now divided into three groups: closed, controlled and preventive.

The areas where precautionary measures will be taken are those where no cases of infection have been detected in the last 14 days. Residents will be allowed to move within the designated area, but access to public places will be limited to avoid crowds.

This news was received positively by the population, who received at least some information about when they should expect the end of the virtually indefinite home quarantine. In practice, everything turned out to be somewhat different. As corr. TASS, residents of far from all residential complexes that were given the status of preventive ones were able to go outside the compound. The authorities explain this by saying that decisions to extend the quarantine, even in the absence of cases of infection, are made depending on the population density in each particular area in order to avoid crowding on the streets.

In the last week, the authorities have launched a "decisive offensive against covid". The lockdown has been maintained in almost all compounds of the metropolis, and in closed complexes people have been tested four times over four days. Residents of many complexes received an additional seven to fourteen days of quarantine after they were found to be infected. All carriers of covid, regardless of the presence or absence of symptoms, are taken to special quarantine centers, since home quarantine is not provided for infected people in China.

The city government announced another round of testing of closed compounds, which will last four days. A number of residents interviewed by TASS fear that mass testing could lead to an extension of home quarantine, given that coronavirus has been regularly detected in closed compounds throughout Shanghai in recent weeks. As one Chinese netizen calculated, if one carrier of covid is found in his residential complex every two weeks, then the quarantine of residents, following the current rules, will end in about 57 years.

Authorities acknowledge that the situation remains difficult , however, indicate a positive trend. According to a number of forecasts online, home quarantine for most Shanghai residents could end in early May, and by the middle of next month, life in the paralyzed metropolis should begin to return to normal. The authorities do not name specific dates, insisting that in order to normalize life, it is necessary to reach zero growth and stop the infection chains in the city.
China Shanghai coronavirus COVID-19 lockdown incidence TASS
|
Facebook
|
Twitter
|
VKontakte
|
Odnoklassniki 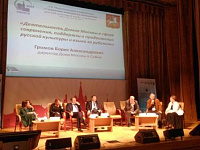 Participants of the Donbass - Kuzbass motorcycle rally arrived in Kemerovo

Navies of Iran, China and Russia began joint exercises in the Indian Ocean