In Israel, the cycle of autumn holidays ends

In Israel, Shemini Atzeret and Simchat Torah are celebrated, completing the series of autumn holidays.

Israelis on Monday evening begin to celebrate two holidays at once - Shemini Atzeret (Eighth Day - a festive meeting) and Simchat Torah (Joy of the Torah). In Israel, they are celebrated on the same day - 22 Tishrei according to the Jewish calendar, which this year falls on the period from sunset on September 27 to the evening of September 28. Outside of Israel - in the countries of the Diaspora - these holidays are celebrated separately: Shemini Atzeret - 22 Tishrei, and Simchat Torah - 23 Tishrei. "The two holidays ending Sukkot are celebrated in Israel simultaneously from tonight until sunset tomorrow - Shemini Atzeret and Simchat Torah," the Israel Foreign Ministry said on Monday. "A distinctive feature of Shemini Atzeret are prayers for rain, tradition says that right now the Lord decides how much life-giving moisture the whole world will receive in the coming year," the Jewish state's foreign ministry continued. "Simchat Torah is a celebration of the renewal of the annual cycle of reading the Torah," the press service said. Holiday Traditions In Simchat Torah, the annual cycle of studying the Pentateuch of Moses ends. Having finished reading the last word of Scripture, the Jews immediately begin again from the first line. In the synagogues, the final chapters of the Old Testament are read, and the first passage of the Book of Genesis is immediately recited. In Simchat Torah, in the evening and in the morning, the ark with the scrolls of the Torah is opened, and all those present perform Hakafot with them - a rite of passage with songs and dances seven times around a small elevation - a bima (stage) on which the Torah is read. The ritual is always accompanied by dancing and jubilation. Sometimes the rite can last for several hours, then everything ends with a long merry feast. From the early 1960s to the early 1990s, the most popular holiday for Soviet Jews was precisely the Joy of the Torah. At Shemini Atzeret, synagogues in Israel solemnly recite a prayer for rain, consisting of verses, hymns, and the request itself. These days, the agricultural year is just coming to an end and the winter season is beginning. There are no large rivers in Israel, the flood of which could water the fields and gardens, and therefore the rains in autumn and winter are in fact the only natural source of replenishment of water supplies. Shemini Atzeret is celebrated immediately after the end of the seven-day Feast of Tabernacles (Sukkot), which is also inextricably linked with water. On the days of Sukkot, it is prescribed to draw water and pour it on the altar. There are lines in the Talmud that say: "He who has not seen the fun of scooping up water has not seen real fun in his life at all." Completion of the cycle of autumn holidays Simchat Torah and Shemini Atzeret complete not only the weekly cycle of Sukkot celebrations, but also the series of autumn Jewish holidays that lasted almost a month. The month of Tishrei, which is ending soon, is the first month of the year in the Jewish calendar. On its first day three weeks ago, Israel celebrated the holiday of Rosh Hashanah - a new, 5782 year according to the Jewish calendar, which is celebrated in honor of the creation of the world. The New Year was celebrated for two days, then came the one-day fast of Gedaliah, a week after that - Yom Kippur (Judgment Day), seven days after which Sukkot began.
Israel holidays religion TASS
|
Facebook
|
Twitter
|
VKontakte
|
Odnoklassniki

In Pakistan, recovering doctors have a better understanding of patients

Chips with "national" taste will appear in North Ossetia

Istanbul marks the anniversary of the legendary tram 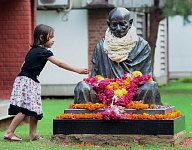 Postage stamps issued in honor of Army Games 2017 in China

In Ust-Koksa, a map of Russia was assembled for speed