In Azerbaijan, veterans of the Great Patriotic War will receive $900 each on Victory Day.

President of Azerbaijan Ilham Aliyev allocated 3.5 million manats (more than 2 million dollars) to provide material assistance to veterans of the Great Patriotic War. The corresponding order, timed to coincide with the 77th anniversary of the Victory, was published on Tuesday on the website of the head of state.

According to the document, each of the  participants of the Great Patriotic War will receive a one-time financial assistance in the amount of 1.5 thousand rubles. manats (almost $900). The widows of dead soldiers or military personnel who later died, persons awarded orders and medals for selfless work in the rear, and the blockade of Leningrad will be provided with 750 manats ($440).

According to the Republican Council of War, Labor and Armed Forces Veterans, 105 front-line soldiers currently live in the country. Every year, on the eve of Victory Day, the authorities of the republic allocate material assistance to veterans. On May 9, employees of local executive bodies visit veterans at home, congratulate them and give gifts.

In total, 700 thousand men fought on the fronts of the Great Patriotic War. natives of Azerbaijan, almost half of them did not return from the battlefield.

Residents of Georgian villages decide how to use state support funds

China has declared the popularization of science a state goal

"Miss Kyrgyzstan" will be chosen in Bishkek 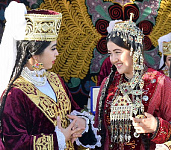 Rosgvardiya ensured law and order during the celebration of the Epiphany

Countries line up for the Sputnik V vaccine